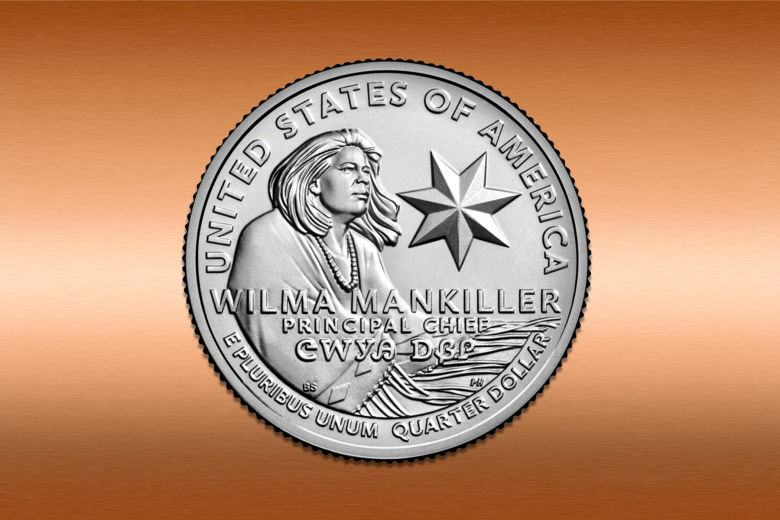 Kermit Mankiller, the former Nez Perce tribal executive, says the quarter is an "excellent representation" of his aunt Wilma, the first woman to be elected primary chief of the Cherokee Nation and now just the sixth American woman to appear on a U.S. coin.

Fewer than 100 people in American history have been depicted on U.S. coins and currency, and Kermit Mankiller knew one of them personally.

Not only knew one, but is related to her.

Kermit was born in Clarkston and previously served as chief executive of the Nez Perce Tribal Enterprises.

Monday was a red-letter day for him and his extended family. That’s when the U.S. Mint released the first Wilma Mankiller quarters during a special ceremony in Oklahoma.

Wilma is just the sixth American woman to appear on a U.S. coin. She was the first woman to be elected primary chief of the Cherokee Nation — the second-largest Native American tribe in the country. She served 10 years in that position, from 1985-95.

“It’s really kind of shocking to think someone in your family is going to have their image on U.S. currency,” Kermit said Monday. “I think she was a great choice. Whether you’re a Native or not, I think she represented only positive things for all of us.”

The Wilma Mankiller quarter is the third design to be released this year as part of the U.S. Mint’s new American Women quarter series, which replaces the popular national park series.

The reverse of the coin shows her wearing a traditional shawl, the wind blowing her hair as she gazes into the distance. The Cherokee Nation seven-point star is shown to her left, while the name of the tribe is written below in the Cherokee language.

“I think it’s an amazing design,” Kermit said. “It’s an excellent representation of her.”

The American Women quarter series is intended to honor the accomplishments and contributions that women made to the development of the United States.

Before this year, the only other historical women to appear on U.S. coins were Susan B. Anthony and Sacagawea — in 1979 and 2000, respectively — plus Helen Keller on the 2003 Alabama state quarter.

A commemorative quarter issued for the World Columbian Exposition in 1893 also showed Queen Isabella of Spain.
Wilma was chosen for the American Women series last year.

Born in Oklahoma in 1945, Wilma was part of a large family of 11 children — including her brother John, who was Kermit’s father.

“They were right next to each other in birth order, so they were pretty close,” Kermit said.

The family moved to San Francisco in the early 1950s, as part of the Bureau of Indian Affairs’ “termination” policy, which sought to assimilate Indigenous people into the American culture. The program ended trust status for Native American-owned lands and dispersed families to urban areas around the country with promises of jobs and housing assistance.

“It wasn’t what they said it would be,” Kermit said. “My family ended up in a slum. Eventually, most of them made their way back to Oklahoma.”

A short biography of Wilma on the National Women’s History Museum website indicates that her commitment to social activism was influenced by the 1969 occupation of Alcatraz Island by a group of about 90 Native Americans and their supporters — including LaNada Boyer of the Shoshone-Bannock Tribe in Idaho.

“When Alcatraz occurred,” Wilma wrote, “I became aware of what needed to be done to let the rest of the world know Indians had rights, too.”

She later founded the Community Development Department for the Cherokee Nation and was a lifelong advocate for improved education, housing and healthcare, as well as for women’s rights.

After she was elected chief, Wilma was able to triple enrollment within the Cherokee Nation, and double employment. She said she wanted to be remembered “as the person who helped us restore faith in ourselves.”

As a child, Kermit wrote letters and spoke with his aunt by phone, but didn’t actually meet her in person until he was in his 20s. He was going to graduate school at Gonzaga University and came down to Pullman to attend a talk she gave at Washington State University.

“I bear a striking resemblance to my father, so she knew exactly who I was when she saw me,” he said. “She was someone who inspired a lot of confidence in the people around her. That was the impact she had on my life. She helped you understand who you were.”

After graduating from Gonzaga, Kermit visited his aunt in Oklahoma. She lived on Mankiller Flats, the land allotted to her grandfather after the federal government forcibly relocated the Cherokee people from their ancestral lands in the southern United States.

“I spent a day with her in Tulsa,” Kermit said. “She was treated like a governor or U.S. senator. I don’t recall having to open a door the whole day. She went from event to event, giving talks and getting an energetic response. It was unlike anything I’d ever seen a Native do before. It helped me understand that we all have a place and should be comfortable where we are.”

Another lesson Kermit’s aunt taught him was to say what needed to be said.

Kermit tried to order some Wilma Mankiller quarters from the U.S. Mint website before June 6, but demand was so great he was put on a waiting list.

The coin is scheduled to be released into general circulation next week.

Lead image: The Wilma Mankiller quarter was released with a celebration June 6, 2022, in Tahlequah, Oklahoma. The coin honors the legacy of the former Cherokee principal chief, who died in 2010. Photo courtesy of the U.S. Mint

William L. Spence is a reporter with the Lewiston Tribune.