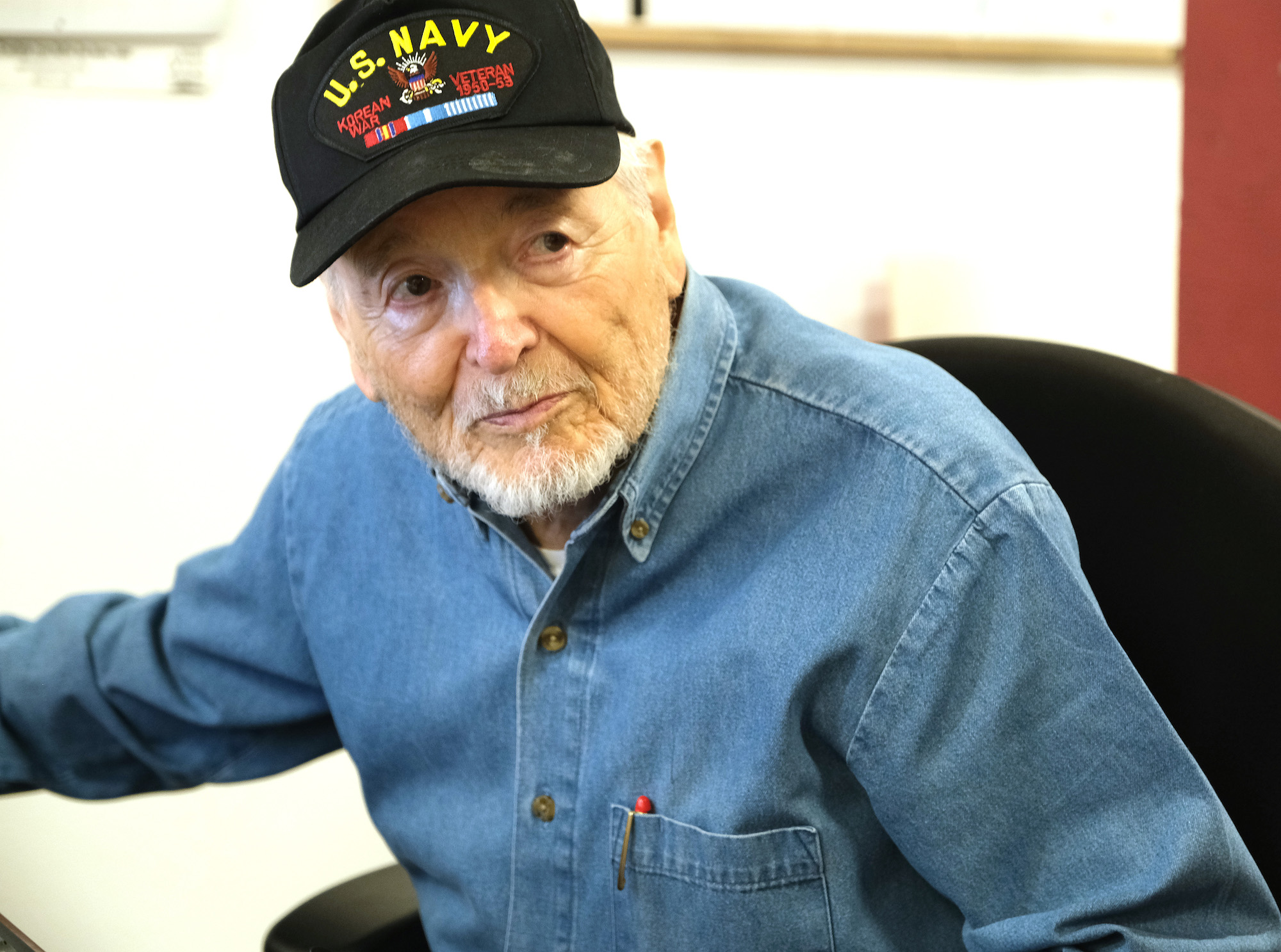 ‘Don’t Be Afraid to Stand Up:’ The Legacy of Tim Giago

The Oglala Lakota journalist "has been a champion of free press in Indigenous communities his entire career and faced challenges, threats and political pressure, but always pushed to bring essential news and information to the people."

At age 87, the longtime journalist was in his element in the busy newsroom, fielding questions from his reporters, while ICT’s national correspondent Mary Annette Pember interviewed him about his time as a student at Holy Rosary Indian boarding school (now named Red Cloud School) on the Oglala Lakota nation in South Dakota.

Irascible and sharp as a tack, he was quick to criticize the current mainstream coverage of Indian boarding schools.

“Reporters need to speak directly with survivors who attended these schools rather than relying on secondhand information,” he told ICT.

Giago described digging a grave for his childhood friend Bozo Richards who died at age 16 from an ear infection at Holy Rosary.

He also shared memories of how his little sister was raped by a school janitor and the scores of his classmates who died from alcohol and drug addiction that he believes was exacerbated by traumatic experiences at the school.

Long before the topic surfaced in the national media Giago was writing about his experiences at Holy Rosary in a 2006 book, “Children Left Behind: The Dark Legacy of Indian Mission Boarding Schools.”

Giago took a lot of heat over the book both from Catholic leaders as well as his own people but in typical fashion, he stuck to his guns, refusing to sugarcoat or walk back any of his reporting.

According to Giago, when reporters called the school to verify his past attendance, school leaders claimed he never attended.

Prior to ICT’s visit with him in Rapid City, however, Pember just spent time in the Catholic Indian boarding school archives kept at Marquette University in Milwaukee. She told him she’d found documentation there of his years at Holy Rosary. He was nonplussed.

“Hey I knew I went there despite their claims to the contrary,” he said.

Politely but firmly he let Pember me know their interview was over, he had a newspaper to put out. Before leaving, he signed Pember’s copy of his boarding school book in typical forward thinking language. “The book you are about to write is needed. Let’s continue to educate, thanks, Tim Giago.”

Tim Giago died July 24, 2022, in Rapid City, South Dakota at the age of 88. He was born on July 12, 1934. His Oglala Lakota name was Nanwica Kcjii which translates to He Stands up for Them or The Defender. Doris Giago, his former wife, said he had cancer and complications related to diabetes. His wife Jackie Giago, didn’t want to talk.

“While working as a reporter for the Rapid City Journal, I was bothered by the fact that although I had been born and raised on the Pine Ridge Indian Reservation, I was seldom given an opportunity to do news stories about the people of the reservation,” Giago, the 1990 Nieman fellow, wrote in a 2005 article in Nieman Reports. “One editor told me that I would not be able to be objective in my reporting. I replied, ‘All of your reporters are white. Are they objective when covering the white community.’”

Giago said by the spring of 1981 he knew he had to start a newspaper at Pine Ridge. The first office was in a former beauty shop. “It seems strange now but when our newspaper hit the stands,” he wrote, “we became the only independently owned Indian weekly newspaper in America.”

“Well, none of us knew what we were doing. So we all learned by the seat of our pants,” said Doris Giago, his ex-wife and co-founder in starting the newspaper in 1981. “We had to start everything from scratch.”

Advertising, circulation, and distribution. They didn’t know any of it but did the best with what they could.

They had their relatives, and nieces and nephews who were just 10 or 12 years old grabbing bundles off the press and selling the papers at the tribal offices.

The newspaper company was successful by several metrics. It went on to win hundreds of reporting awards from regional and Native press associations. And Giago said investigations from the newspaper “caused banks to be fined and rip-offs of the tribal government to be halted … Lakota Times proved that freedom of the press could not only succeed in Indian Country but that it can make a major difference in the way news is covered on the Indian reservations of America.”

Giago was fearless in his fight for Native peoples.

In 1990 Giago wrote a challenge to the governor, calling for South Dakota to have a "Year of Reconciliation." Gov. George S. Mickelson responded: "I couldn’t agree with you more, Tim. We must reconcile those differences. As the state of South Dakota celebrates the beginning of its second century, we must also remember that statehood was a very sad time for the Native Americans." As a gesture, the state dropped Columbus Day and changed it to Native American Day, the first state to do so.

Take the early days of The Lakota Times for example.

“One of the things that was going on when we first starting, we were just coming out of all the problems of 1973 with the occupation of Wounded Knee,” Giago told ICT in July 2021. He had a different perspective on it. “I thought a lot of the things that the American Indian Movement did were more harmful than helpful.”

“And on December of that year, I got firebombed. People came by and threw motel cocktails in front of my building. And luckily, a BIA officer was driving by and saw it, and he jumped up and kicked him away from the doors. So those are some of the hard things that came out of work. One night got in my pickup and somebody put a bullet through my windshield and just missed my head,” Giago said. “So, I mean, if that's what it took to get the freedom of the press going on the reservation, I guess that's what it took.”

“The impact Tim had on Indigenous journalism as one of NAJA’s founders is immeasurable. He has been a champion of free press in Indigenous communities his entire career and faced challenges, threats and political pressure, but always pushed to bring essential news and information to the people. He’s irreplaceable,” said Rebecca Landsberry, the organization’s executive director, in an email. “I know generations of Indigenous journalists will look to his dogged dedication to the truth for decades to come and be inspired by his tremendous legacy.”

Part of Giago’s legacy and push to make voices heard is his knack for creating newspapers.

"Tim Giago was a serial creator — first a TV show. Then Lakota Times. Then the Native American Press Association, later the Native American Journalists He always pushed for more, reaching for an even better way to serve Indian people with news. So after Lakota Times it was Indian Country Today. Then Lakota Journal. Then Native Sun News. He never lost his vision about how important it is for a community to have a journalistic recording of itself,” said Mark Trahant, ICT editor-at-large.

"Along the way he lured dozens of Native people into this mission of journalism. He let so many Native young people know how important information can be — and why they had as much right to it as anyone."

Takes War Bonnett is an example of seeing and fostering talent.

In 2004 he encouraged her to create a newspaper for Pine Ridge, the Lakota Country Times. Now called The Lakota Times.

Pulitzer Prize finalist and cartoonist Marty Two Bulls Sr. started his career with Giago in 1988. Two Bulls and his wife were both hired — his wife in the business department and Two Bulls in production assembling ads.

“And one day I did an editorial and I took it to him. I said, ‘see if you can do a cartoon to this’ because he had a good hand in art. So he did a cartoon for the editorial,” Giago told ICT. “And from then on every week, I'd give him my editorial and he'd do the cartoons for it.”

His ex-wife and friend, Lynn Rapp, said Giago loved the cartoons in the paper. “He felt that it was really critical to make fun of the situation but also make fun of ourselves.”

Perhaps that was an extension of his humor. “He had a marvelous sense of humor, and could make jokes out of many things,” she said. “He could make you laugh like crazy.”

Besides his humor, Rapp mentioned that she wants people to know that Giago “was very compassionate for people who were in trouble. He was always kind to those who needed kindness.”

That compassion and his strong-willed personality drove his life mission of telling the truth for Native peoples. Because they deserved to know.

Giago paved the way for Native journalism; the best way to memorialize him is to continue the work.

This story originally appeared on July 25 in ICT.

Jourdan Bennett-Begaye is the editor of ICT. She is the first woman to be the chief news executive and top editor of the 40-year-old newspaper and website. She's also a Native American Journalists Association (NAJA) board member. She is a Diné citizen of the Navajo Nation. She identifies as the Towering House Clan, the Coyote Pass Clan of Jemez, the Mexican Clan, and the Hopi with Red Running Into the Water Clan.

Mary Annette Pember is a national correspondent for ICT. She is an award-winning journalist whose writing and photography have appeared in numerous publications, including The Atlantic, The Guardian, The Washington Post, The New York Times, Columbia Journalism Review and many others.