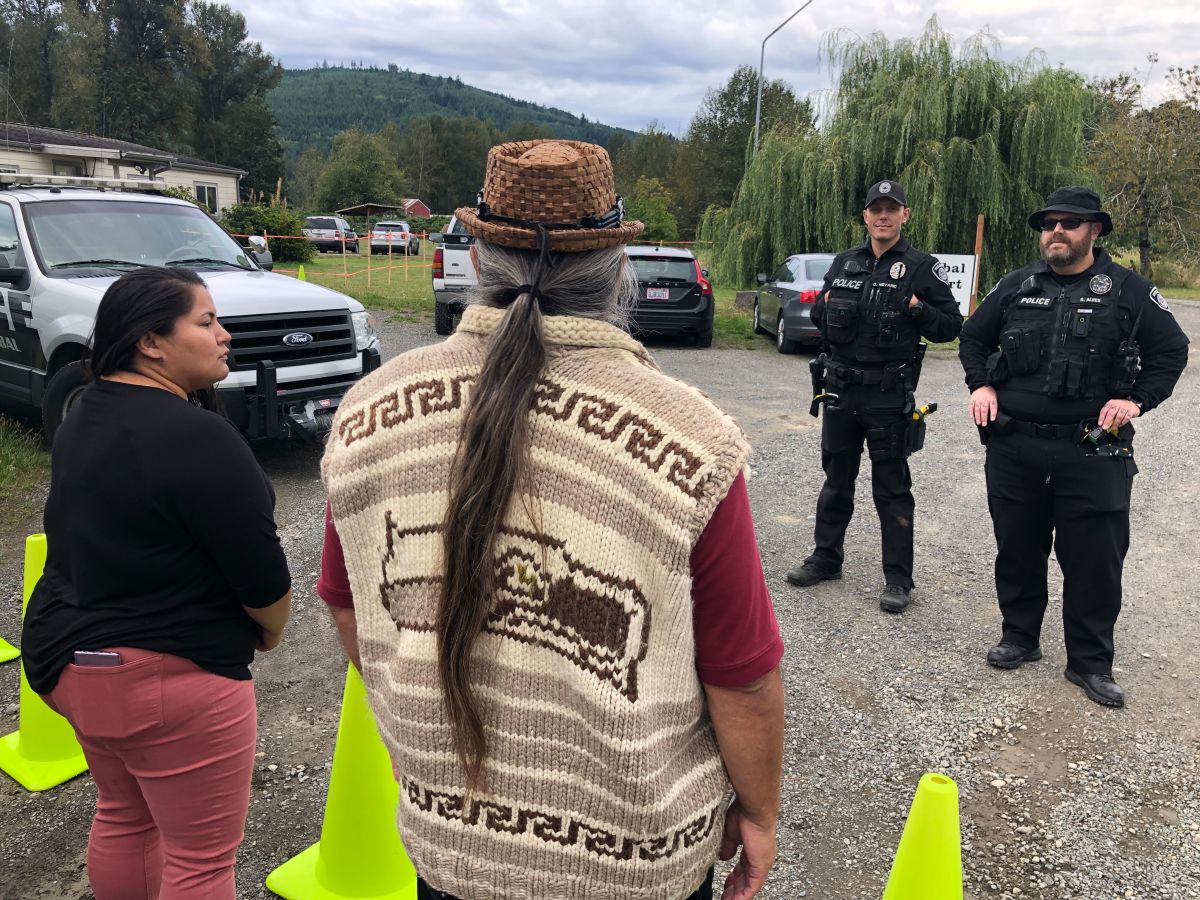 Severe winter weather temporarily delayed the planned evictions set for last week for some of the more than 60 former Nooksack tribal citizens who were among hundreds disenrolled from the tribe in Washington.

Despite at least five pleas from federal agencies to delay the actions while a civil rights investigation is completed, the tribe was set to begin evictions or the hearing process on Dec. 28 for some of 61 former tribal citizens and two of their children who are enrolled members living in 21 federally funded homes on Nooksack tribal land.

But record cold temperatures and snow delayed the process for at least two families last week — one that had been ordered to vacate by Dec. 28 and another who had an eviction hearing scheduled for the same day.

Gabe Galanda, a citizen of Round Valley Indian Tribes and the attorney for the families facing eviction, said that hearing was rescheduled to this week. He also said that the man and his family ordered to vacate by Dec. 28 expected to be removed from their home by police, but that it appeared officers were unable to reach the home because of snow and ice.

“All signals are that they are moving full speed ahead,” he said.

Tribal Chairman Ross Cline confirmed in an email to Indian Country Today and Underscore.news last week that the poor weather appeared to have delayed the evicted process but didn’t say how long he expected the pause to last.

At issue is whether those who are being kicked out fully own the homes or at least have equity in them. Galanda has said in all but one case, the former tribal citizens being evicted had lease-to-own agreements with the tribe for the federally subsidized homes. Many of the lease periods have been completed, he said, meaning the residents should own their homes.

The tribe has said no such arrangements existed.

Other concerns have been raised about a lack of due process for the residents through the tribal court. The tribe has prevented Galanda and other attorneys from representing residents in court and in other hearings, he said.

The concerns prompted the federal Department of Housing and Urban Development to request the tribe to delay its eviction processes in September. That same month, HUD recommended the Department of Interior launch an investigation.

Since then, other federal agencies, including the Bureau of Indian Affairs, have pressed the tribe to delay any eviction proceedings until the Department of the Interior completes its investigation and determines whether the tribe is violating civil rights or other federal laws in moving forward.

The BIA again asked the tribe to delay any evictions on Dec. 23, a day after Indian Country Today published a story about the issue. On Dec. 27, HUD told Galanda that the agency or its partners may be able to provide assistance or coordinate help for any families evicted.

“Based on the latest information we have received, it appears that the Nooksack Tribe intends to proceed with their eviction process in spite of both HUD’s and BIA’s request(s) that the Tribe delay such action for thirty days,” the agency said.

The federal government on Dec. 17 and Dec. 27 warned the tribe that it could be sanctioned or face other adverse actions if it proceeds with the evictions before an investigation is complete, or if that review finds violations of any federal laws or HUD program requirements.

Cline said the tribe has provided federal agencies the requested documents, including those that show the residents did not have lease-to-own agreements with the tribe.

The evictions have been upheld in previous court challenges, he said. In addition, a federal court earlier this year ruled that the tribe had immunity from lawsuits challenging the disenrollments and that the tribe, like other federally recognized tribes, had the right to define who qualifies for tribal citizenship.

“What is not alleged is the enrollment status. They were dis-enrolled roughly 4 years ago,” he said in his email. “If Gabe Galenda (sic) really cared about Native American Indians he would be doing his magic and gaining much needed Nooksack Tribal trust land so we could work out a deal to leave his non-Indian clients on Nooksack Trust Land.”

The controversy, which dates back about 10 years, led the federal government to temporarily withhold about $14 million from the tribe and criticize the disenrollments as part of what officials said was a plot by “abusive” and “illegitimate” pro-disenrollment tribal leaders to seize and maintain power.

The people the tribe is trying to evict are among the last of a group of 306 — about 15 percent of the tribe’s population — who were disenrolled and still lived on tribal lands. Many of those who the tribe wants to force from their homes are elderly or have lived in the same home for generations, Galanda said.

The timing of the evictions, Galanda said, comes amid “historic circumstances” during the Christmas and New Year's holidays, amid a surging COVID-19 pandemic, just months after historic flooding and days after record-breaking winter weather.

The family that had its eviction delayed because of weather has been on “pins and needles,” he said, expecting to be forced from their home by tribal police because they “did not and will not vacate.”

In recent days, Galanda said people, including a drum group, have gathered at the homes of some of the families facing evictions in solidarity. He added that he’s encouraged those gathered and the families to “not give this process credence,” saying they should stand their ground and not willingly vacating the homes. He said he’s also told them to record any eviction processes or any efforts by tribal police to serve notices or enforce eviction orders.

Lead photo: Two Nooksack tribal citizens who were disenrolled and are now facing eviction encounter Nooksack police while entering a tribal court on Sept. 12, 2019. The tribe is now pressing forward with evictions of 61 disenrolled citizens and two of their enrolled children, but bad weather forced a scheduled Dec. 28, 2021 eviction. Photo courtesy of Galanda Broadman law firm