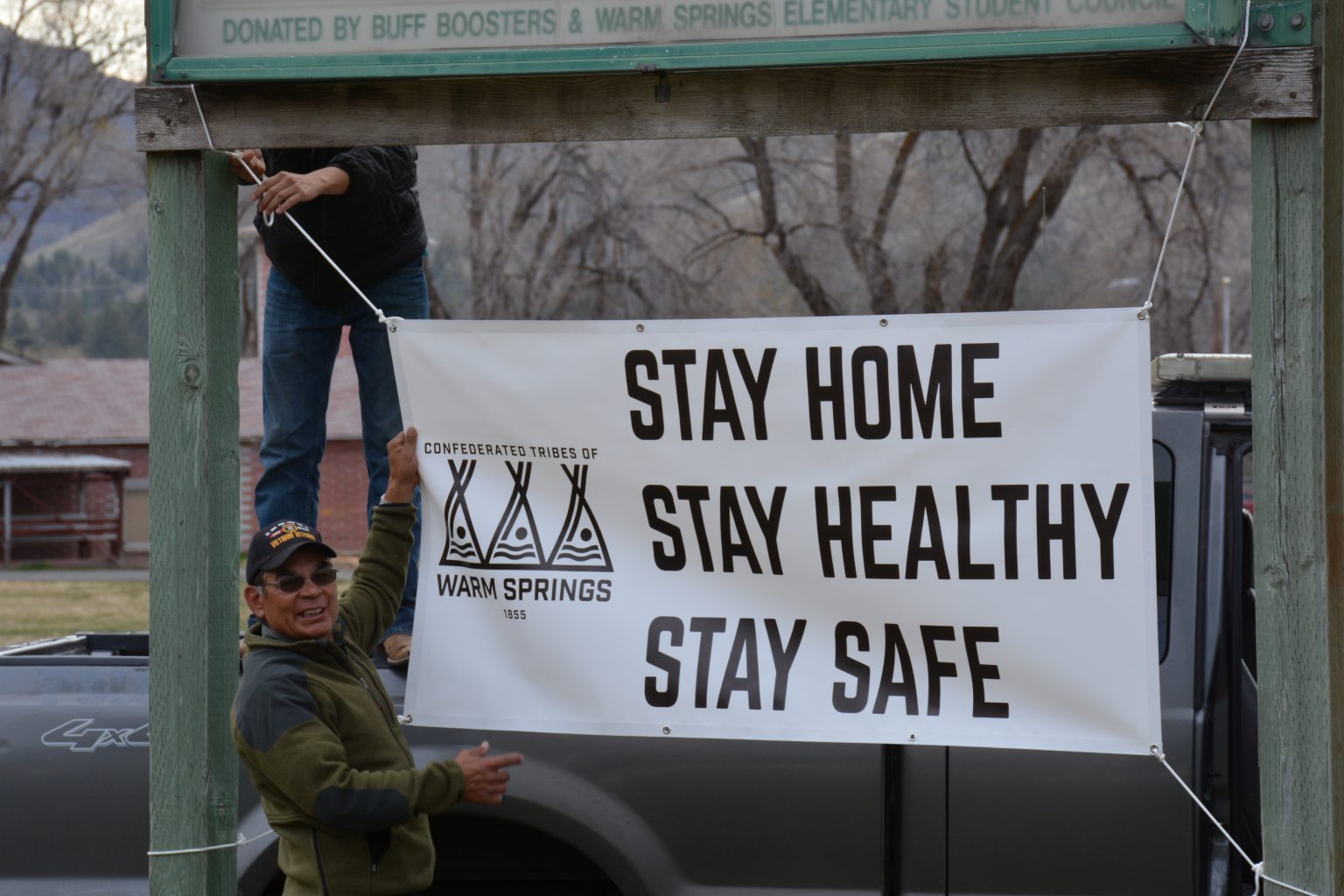 A Historical Perspective on Pandemic

The Native American experience with COVID-19 is only the latest chapter in a centuries-long tragedy.

The first recorded wave of new diseases visited the tribes of Oregon in the 1770s. Smallpox, hitchhiking in the bodies of white traders, came up the Columbia River and killed about 30 percent of the Native Americans in the Willamette Valley and Columbia River basin. Around 1805, explorers Meriwether Lewis and William Clark noted the telltale scars of smallpox on the faces of older Native American men on the Columbia, signs of previous unreported trading with whites.

Between 1818 and 1846 the U.S. and Great Britain held joint claims over the area known as the Oregon Territory, although their physical presence in the region was minimal. The U.S. had yet to establish any kind of federal occupation on the Northwest Coast, which meant there were few whites other than missionaries, fur traders, and the occasional settlers, most of whom were British and French Canadians working for the Hudson’s Bay Company.

But this was enough to bring the next scourge. When malaria arrived in Oregon around 1830, the thought of aiding Native Americans who fell ill was anathema to most whites and certainly to those in the halls of power back east who believed in Manifest Destiny. Trappers and representatives from the Hudson’s Bay Company were similarly disinterested in helping Native Americans, even though much of the company’s wealth was made possible by indigenous expertise in tracking and trapping wildlife.

The disease spread quickly, and people in frontier regions had to make do with the few resources available to them. Some travelers, like William Townsend, an early fur trader and explorer, had small amounts of quinine. Atypical of others from that era, Townsend shared the life-saving medicine with a few Native Americans. He even showed one village of Chinookan peoples how to make a similar treatment using the bark of dogwood trees, but the illness was taking so many lives so fast, these efforts had little effect.

Dr. John McLoughlin, the trading agent for the Hudson’s Bay Company at Fort Vancouver, was one of three doctors in the Oregon Territory during that time period. McLoughlin tried to establish some treatment hospitals, but the quinine ran out quickly, and available federal, missionary, and Hudson’s Bay Company records indicate that remaining medicines were used solely to treat white settlers. Meanwhile, Native Chinook peoples tried to rid the body of malaria by way of traditional methods, namely long sessions in sweathouses. It didn’t work, and when victims—emaciated, dehydrated, and fighting fevers—jumped in the cold rivers after the sweat, some could not take the shock; according to Robert Boyd’s The Coming of the Spirit of Pestilence, they died on the spot and washed away with the current.

American Naval officer, Lt. William A. Slacum, who arrived in Oregon in 1835 to gather information about the British, reported in his official intelligence to the U.S. Senate, “The ague and fever, which commenced on the Columbia in 1829, likewise appeared on this river [Willamette] at the same time. It is supposed that it has been more fatal in its effects[;] it has swept off not less than 5,000 to 6,000 souls.”

Slacum underestimated. According to Boyd’s research, between 1800 and 1840, the local population of Native Americans was reduced from about 15,500 people to fewer than 2,000, decimating populations of Kalapuyans, Chinookan, and Wappato Island peoples. A Catholic missionary noted around this same time that there were “large villages which the fevers of 1830 entirely depopulated.”

For those who survived, more hardship was yet to come. In the mid-19th century, nearly 4,000 Native Americans in Oregon were forcibly removed from their ancestral homelands. The Western Oregon tribes, nearly three dozen of them, had signed seven treaties with the U.S. government between 1853 and 1856. In these various treaties, the Native Americans relinquished about 19,000,000 acres of land in exchange for healthcare, food, housing, other services, and peaceful resettlement on a permanent reservation.

But when the tribes arrived at the newly established Grand Ronde Indian Reservation during February and March 1856, many people were already sick, some from the month-long forced marches in the dead of winter, others from recent wars with the U.S. military on the Columbia River and in the Rogue River region. Now, gathered together on the reservation, they faced an immediate public health crisis.

Ignoring the treaties, and facing a lack of adequate funding, the federal Indian Agents at Grand Ronde did little to help the Native Americans. Canvas tents and meager provisions were provided to fend off the cold or tend to the sick. The tight living conditions on this fledgling reservation meant rampant disease spread. Any tribes from remote areas that had thus far avoided new diseases were now especially vulnerable.

A makeshift hospital was eventually constructed, with some 70 beds, but it was ill-equipped to handle the hundreds of sick patients. In 1857, Anson G. Henry, the physician hired by the Indian Agency at Grand Ronde, wrote in one of his official correspondences that “… very little preparation had been made for the comfort or successful treatment of the large number of naked diseased Indians, who had been collected together suddenly from all parts of the territory. I found them sick [and] dying under circumstances which appealed most strongly to the sympathies of the human heart.”

Medical reports suggest that during the first year alone at the Grand Ronde Reservation, more than half of the population became sick. By late 1856, in the first health report for the reservation, 272 people had been treated in the hospital, 82 were dead, and another 2,121 people were sick but not hospitalized. (There were likely many unreported deaths, owing to Native Americans’ distrust toward white doctors. Family members would bury deceased bodies in secret in the forest.) Nearly everyone on the reservation was ill at some point during that year, and not everyone had access to modern medicines of the time.

The emotional and physical trauma that Native Americans felt is unimaginable. Fear of white settlers, government officials, and doctors was so pervasive that even the sound of a trumpet was frightening. On the Grand Ronde Reservation, the trumpet was used to call people to attention, but many Native Americans, believing that the instrument itself caused illness, sought to avoid its call. (Trumpets and bugles were also used by the military during its violent campaigns against Native Americans throughout the West.)

Over the next two decades, hunger only compounded the nightmare facing tribes throughout the Pacific Northwest. The land they had been given to cultivate was some of the least productive in the nation, and many Native Americans were too old or sick to do much foraging. In 1862, at the Siletz Reservation, Chief Sixes George was recorded saying: “Our people have had to eat frozen potatoes, that are rotten, and the carcasses of dead horses. They are dying very fast, and my heart is sick. I think rotten potatoes are not good for any people.”

Spurred by President Ulysses S. Grant’s promise of citizenship to tribal people who became “civilized,” in 1873 Native Americans at Grand Ronde and Siletz were allotted a few hundred acres of land, on which they could grow their own food. A decade later, after federal investments in saw and grist mills, the remaining Native Americans on Oregon reservations were self-sufficient.

Even with these minor gains, the struggle for Native Americans in Oregon continued. In a letter to President Grant in 1872, Chief Louis Nepesank of the Umpqua tried to summarize this sense of nonstop loss: “The men you have sent here for our officers have not only stolen our money but they have violated our women, and scattered diseases among us which have reduced our numbers from thousands to hundreds. … It seems like we have been a long time in the dark night; we can’t see anything—a heavy cloud has settled down upon us and we seem to be lost.”

Today, the Native American experience with COVID-19 is informed by collective memories of disease, death, and lack of federal oversight. Exercising their sovereignty, tribes have halted much of their economic activity while limiting entry onto reservations and using additional authority to try and save their people from the ravages of the virus.

Nevertheless, many tribes lack the resources to meet the healthcare needs of the population, as was the case for the tribes of the Grand Ronde in the mid-19th century. That leaves them reliant on the same federal government that for centuries has outright broken treaties or simply put Native American interests last. 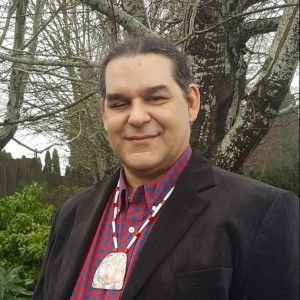 David G. Lewis, Ph.D, is a citizen of the Confederated Tribes of Grand Ronde and an instructor in Anthropology and Ethnic Studies at Oregon State University. His contact information, essays, and posts about the history of indigenous people of Oregon can be found at ndnhistoryresearch.com