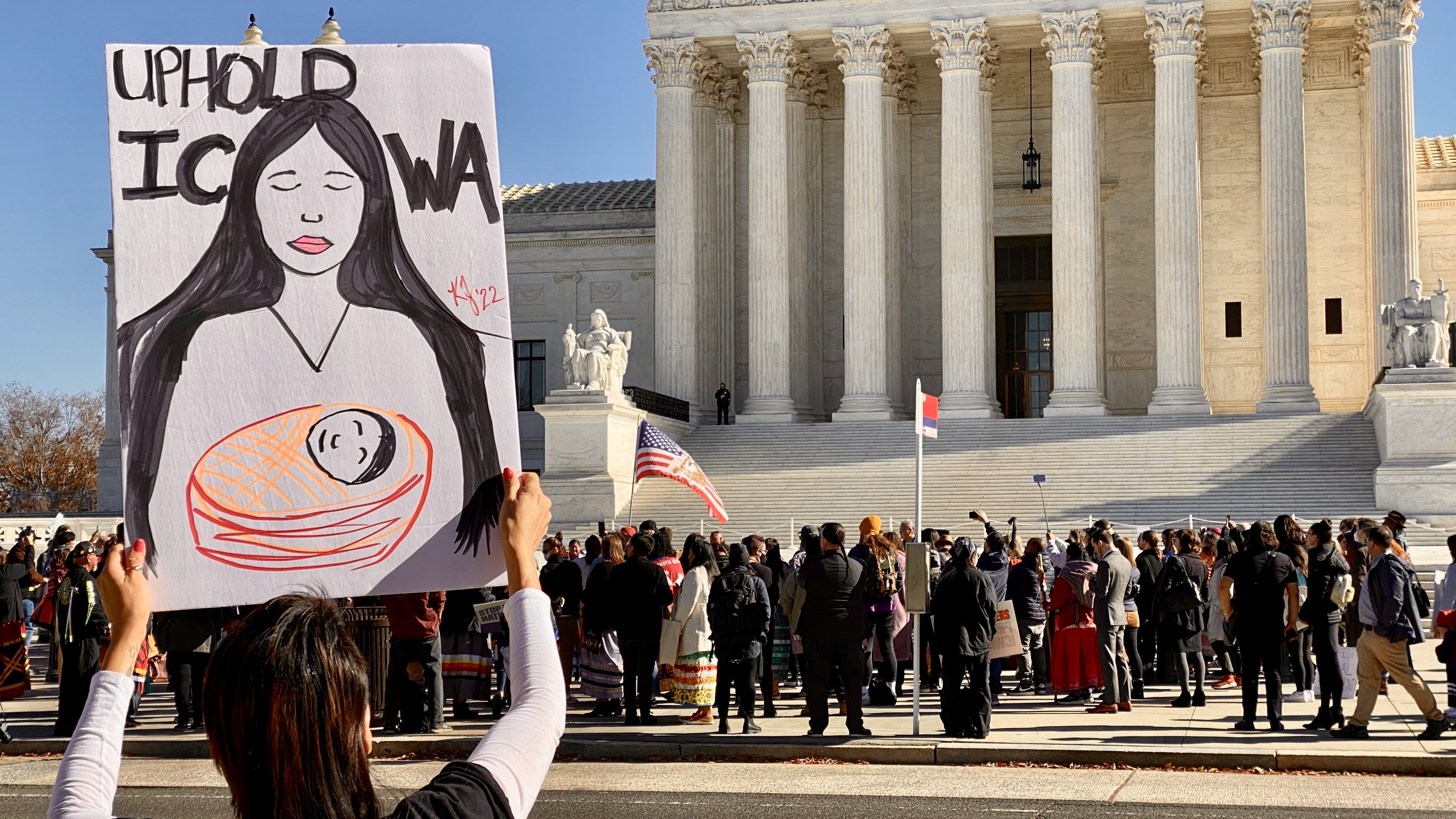 Kimberly Jump-CrazyBear held up a self-made “Uphold ICWA” sign across the street from the U.S. Supreme Court in Washington, D.C., Wednesday morning.

“I’m just here on behalf of all of you who can’t be here today. To help lend my voice,” she said before the oral arguments for Haaland v. Brackeen began. “Without our children, we don’t have a people anymore.” Jump-CrazyBear is Osage and Oglala Lakota who grew up in Virginia.

While Jump-CrazyBear held up and alternated her sign, a woman across the street at the rally said over the speakers: “If you take our children, you take our identity.”

Jump-CrazyBear was one of the hundreds of Indigenous peoples and allies who showed up in front of the highest court in the land to show their support for the Indian Child Welfare Act.

Approximately 60 stood in line waiting to sit inside the court to witness the oral arguments. Many sat between the Capitol and court listening to three hours of oral arguments on their headphones, and others listened to the line of speakers and songs all morning and into midday.

‍Haaland v. Brackeen challenges the Indian Child Welfare Act, a law that has been referred to as the “gold standard” for child welfare by many child welfare organizations. It was enacted in 1978 to “halt the unnecessary forced removal of Native kids from their families,” said Sarah Kastelic, an enrolled citizen of the Native Village of Ouzinkie and executive director of the National Indian Child Welfare Association. (She is also a board member for Underscore News)

“So in our organization, one of the things that we talk about is the recipe for colonization,” Kastelic said. This recipe is “consistently followed by colonizers to colonize Indigenous people.”

She said there are five ingredients:

This would meet the United Nations definition of genocide.

Among the dozens carrying ICWA signs was Bobbie Hamilton. She traveled 1,300 miles from El Reno, Oklahoma, with 150 citizens from Cheyenne and Arapaho Tribes to show support.

Hamilton is at the frontlines of Indian child welfare. She’s an Indian child welfare case worker with the Cheyenne and Arapaho Tribes and a foster care worker. She retired from the U.S. government as a registered nurse with veteran’s affairs and the Indian Health Service.

Hearing the oral arguments hit home with her, she said.

"So every day, we face the trials and tribulations that they're (the children are) facing. There's trauma. There's a lot of feelings that the children have that they are trying to deal with, and on a daily basis, and I'm there with them. I feel those feelings. I feel their frustration, and even their happiness when their happiness comes through. I'm there with them,” Hamilton said standing in front of the Supreme Court. “And so our children are very important to us and we want what's best for our children. It's hard to see them in situations that they're in sometimes. Hard decisions have to be made. And I'm right there with them feeling the same thing.”

Principal Chief Chuck Hoskin Jr. of the Cherokee Nation was one of several leaders in attendance at the three hour hearing. The Cherokee Nation is the largest Indigenous nation in the country with over 430,000 citizens.

“The dispossession of Native children, from their families from tribal lands, has done a measurable damage to Native peoples in this country over the centuries,” Hoskin said during a press conference after the hearing. “We were here today collectively, as Native peoples to make our case in court, that the Indian Child Welfare Act is constitutional, and to send a message to this country that we will not stand for the dispossession of our children, and the further erosion of our Native peoples.”

Before the passing of ICWA up to 35 percent of Native American and Alaska Native children were removed from their homes and placed in non-Native homes. Generations of Indigenous families were disrupted, causing irreparable damage to Indigenous communities as a whole.

“Keeping our children at home is where they need to be,” Charles Martin, chairman of the Morongo Band of Mission Indians. “We will do as we always have as our ancestors did, we will move forward to protect future generations.”

“In every single generation, we've had to fight this fight and I'm telling you spending three hours in this courtroom with the highest court of this land, the Supreme Court and sit here and still feel that they do not get us, three hours of agonizing argument, agonizing questions where they don't understand the basic concept, that we have inherent sovereignty, and we have inherent rights to the future of every single Native child born into this generation,” Sharp said.

As with many issues in Indian Country, ICWA has bipartisan support. Leaders noted that it would be shocking if the Supreme Court did not uphold the act. During her speech, Sharp added that dark money and special interests groups looking to attack tribal sovereignty, that this case isn’t a normal Indian child welfare case.

“There's dark money out there that is strategically targeting our children, our natural resources, our sacred sites. They want to continue to enrich profits at our expense,” Sharp said. “We know that no matter what they do, we occupy a certain place in this life as Native people. We occupy a position of inheriting all that our Creator gifted to us. There's not a single thing that any one of them can do to take that away from us, no legislation, no court decision. They can't buy their way into that and they can't regulate us. We are sovereign tribal nations from the beginning of time until the end of time.”

Lead photo: The U.S. Supreme Court heard oral arguments Wednesday, Nov. 9, 2022 in Haaland v. Brackeen, a case that will decide if the ICWA is constitutional. Kimberly Jump-CrazyBear, Osage and Oglala, from Virginia, holds a sign in support of ICWA. Photo by Jourdan Bennett-Begaye, ICT

Jourdan Bennett-Begaye, Diné, is editor of ICT and based in its Washington bureau. She is the first woman to be the chief news executive and top editor of the 40-year-old newspaper and website. Bennett-Begaye’s Grey’s Anatomy obsession started while attending the S.I. Newhouse School of Public Communications. Follow her on Twitter: @jourdanbb or email her at jourdan@ictnews.org.

Pauly Denetclaw, a citizen of the Navajo Nation, is Haltsooí (Meadow People) born for Kinyaa’áanii (Towering House People). An award-winning reporter based in Gallup, New Mexico, she has worked for the Navajo Times and Texas Observer covering Indigenous communities, and her radio pieces have aired on KYAT, National Native News, NPR’s Latino USA and Texas Public Radio. She is a board member of the Native American Journalist Association. Follow her on Twitter, @pdineclah.