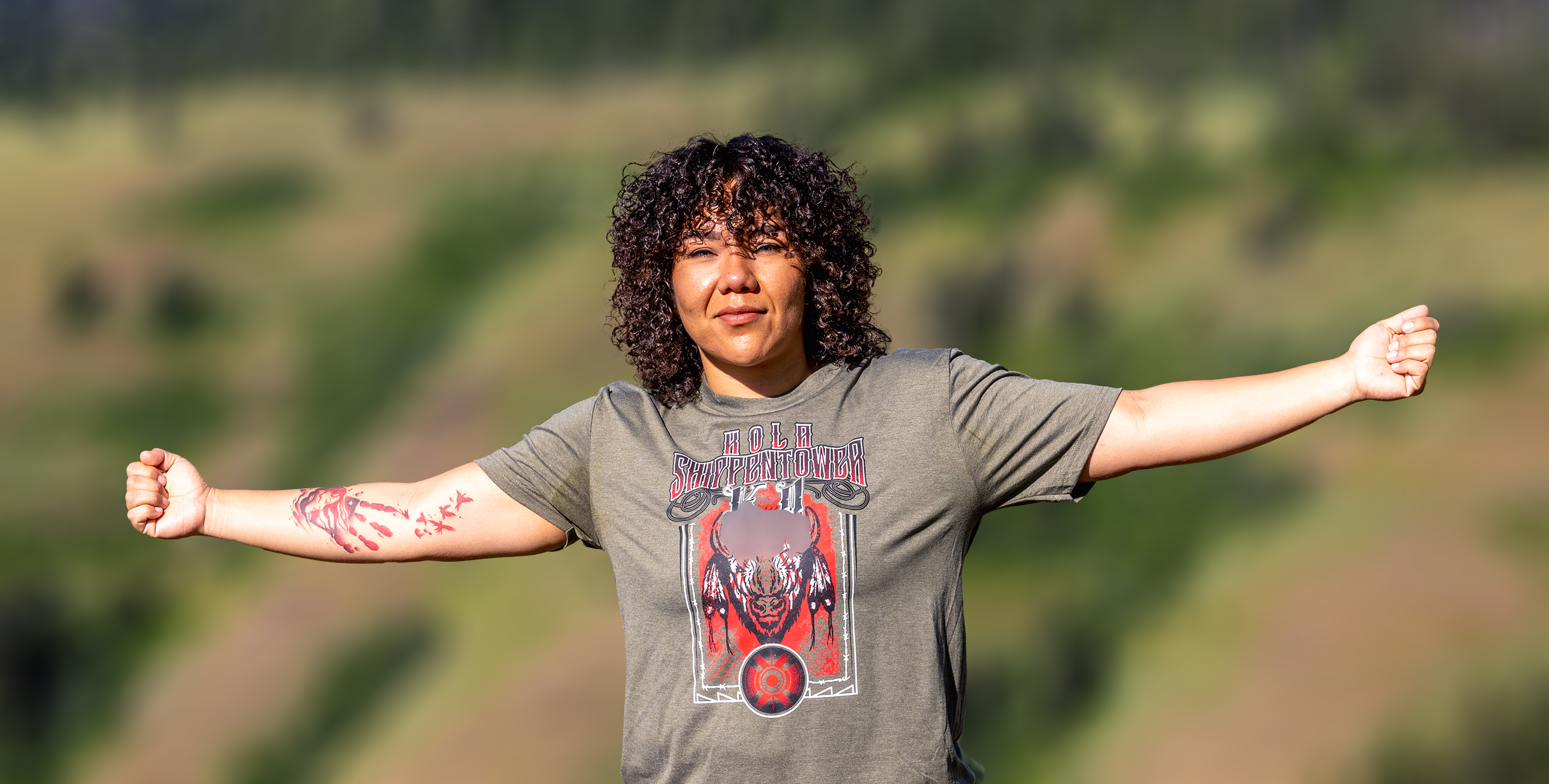 Three Indigenous women in Oregon, all survivors of violence who have become advocates in the footsteps of Desireé Coyote, share their personal stories in an effort to inspire and help other survivors.

Editor's note: This story is part of an investigative project in partnership with EO Media Group that shows how obstacles to prosecution of violent crimes against Indigenous people in Oregon prompted survivors to use their stories of trauma to empower others and inspired initiatives encouraging change, as well as how evolving policies are shaping the legal landscape. The series also offers an urban Indigenous perspective and examines efforts in Portland to combat violence against Native Americans. Read the entire series here.

Disclaimer: The stories in this series include descriptions of physical and sexual abuse. Underscore's policy is to protect the privacy of survivors of sexual violence by withholding their names. However, the women telling their stories here chose to be named. Resources are available for trauma survivors at the Strong Hearts Native Helpline and the National Sexual Assault Helpline.

No one story can encapsulate the trauma that Indigenous survivors of domestic and sexual violence have endured.

But taken together, the stories of three Indigenous survivors in Oregon show what it means to forgive, to raise a child in a painful world, to find the strength to keep fighting, to build a community and find a home.

Shaped in isolation by the traumatic events they faced, their stories are linked by one woman who helped them find their voice and inspired them not only to press on through their pain but to bring other survivors with them.

A growing body of research shows that Native Americans nationwide endure disproportionately high rates of violence. The Centers for Disease Control and Prevention says nearly half of all Native American women have suffered physical or sexual violence. A separate Justice Department report found that one in three Indigenous women have been raped or experienced an attempted rape — more than twice the national average.

While the national research indicates high rates of violence on tribal land nationwide, official crime statistics from authorities in Oregon paint a murky picture at best. Federal statistics obtained from the FBI’s Summary Reporting System contain violent crime data from just one tribal police department in Oregon — Umatilla — prior to 2006. Data is missing in the system for one or more tribal police departments for seven of the last eight reporting years, and more before that.

The federal data reporting system doesn't require local police agencies to submit crime statistics, and federal officials don't track why agencies choose to report data or not, according to an FBI spokesperson.

What the data lacks is revealed through an untold number of Indigenous women in Oregon who share their stories of trauma to empower other survivors. They are now raising their voices.

At the center of three women who shared their stories is Desireé Coyote, the manager of Family Violence Services on the Umatilla Indian Reservation. She says she was kidnapped, beaten and sexually assaulted by her ex-husband in the foothills of the Blue Mountains near Pendleton in 1991, as reported to tribal authorities.

In the years to come, Coyote would impact the lives of countless Indigenous people as one of Oregon’s preeminent advocates for survivors of violence, and she would empower many women to help others, too, according to interviews with state and tribal officials. Starting in the early 2000s, she was among the first Indigenous women to work as a victim advocate with the governor’s office and the Oregon Department of Justice. In time, she would spearhead the Umatilla Indian Reservation’s efforts to gain essential protections that, had they been implemented decades earlier, could have helped her.

Sarah Frank, an Indigenous woman who grew up on the Warm Springs Indian Reservation and in Pilot Rock, was raped as a 17-year-old by two men at a party on the Warm Springs reservation, she said. As she shifted in and out of consciousness, she could see a man standing nearby. He could have stepped in and stopped them, but he chose not to, she said. When she came to, she realized that her friends had abandoned her, too.

"Nobody was there to help," she said. "I really think it was a setup. I feel like I was targeted."

Frank would remain friends with the sister of one of her alleged rapists. One day, she stood alongside her friend and family as the man lay dying from alcoholism in a Madras hospital, a moment she would reflect on for years to come.

“Even now, I look back and realize that I was able to forgive him,” she said of that day. She would go on not only to advocate for survivors like her on the Warm Springs Indian Reservation, but she would visit jails and prisons, sharing her story with perpetrators, hoping to instill empathy.

But even today, she wonders what might have happened if the man standing nearby that night had stepped in and saved her. "I've always wanted to ask him why he didn't help me ... I just have not had the courage and opportunity."

Frank saw Coyote speak at a domestic violence conference in Pendleton in the early 2000s. She, like many others, was struck by her bravery and felt encouraged to help others.

“She was making change, doing what I wish we could have done in Warm Springs,” she said.

Kola Shippentower-Thompson, a member of the Confederated Tribes of the Umatilla Indian Reservation, was raped in Pendleton at age 19 and later experienced domestic violence at the hands of her ex-boyfriend and her ex-husband, she said. One day, she said, her ex-husband hit a clogged duct in her face, causing a severe hematoma. Her face was so deformed that she needed surgery. A mixed martial arts fighter since 2010, she told her friends that it was just an accident from practice. Today, she still can’t feel the right side of her face.

In 2016, Shippentower-Thompson made a social media post about the alleged domestic abuse, with a photo of her face pre-surgery. The post went viral. Soon, she was speaking with survivor after survivor, many of whom were Indigenous women. Now, she travels across the West, providing safety training and self-defense classes for women, while also competing in mixed martial arts. “That’s where I felt most at home: fighting,” she said. “That’s what most Natives are. We’re fighters.”

Shippentower-Thompson said that, as she faced domestic violence, she met with Coyote. She helped her feel safe and understood. She, too, was a fighter.

Althea Wolf, the granddaughter of the late Umatilla Tribal Chief Raymond Burke, is a sexual assault survivor. After she had a daughter of her own, she spent eight months contemplating whether to enroll her as a Umatilla tribal member. She worried that, if her daughter was enrolled, she would have fewer protections.

Eventually, Coyote helped convince Wolf to enroll her daughter, saying that her daughter would be safer today than Wolf was as a young girl: “We can’t let fear stop us.” But Wolf wanted to help survivors like her. So she began working alongside Coyote as an advocate, writing letters to lawmakers for support and raising funds for rape kits for the tribes’ victim services, speaking at annual events around sexual and domestic violence. “It’s almost Third World,” she said, “the way women and girls are not protected in Indian Country.”

Wolf described Coyote as "a graceful fighter" who "doesn’t hesitate to believe."

The three Indigenous women telling their stories today all say it was Coyote who empowered them to help others.

* Lead photo: Kola Shippentower-Thompson, who experienced rape at age 19 and violence at the hands of an ex-boyfriend and ex-husband, is now a mixed martial arts fighter who helps other abuse survivors by training them in safety and self-defense techniques. The red handprint tattoo on her right arm, a symbol of Murdered and Missing Indigenous Women, is joined by doves representing members of her family who have passed on. Photo by Kathy Aney/EO Media Group

* The logo was designed by Jessica Joaquin, an enrolled member of the Tohono O’odham Nation, who has been a graphic artist for more than 20 years. She has won five Native American Journalists Association awards for layout design and podcasting, and has worked for the Gila River Indian Community and Salt River Pima-Maricopa Indian Community.

Bryce Dole is an education reporter with The Bulletin. He previously worked as a government and public safety reporter with the East Oregonian. He grew up in Grants Pass and has lived in Oregon all his life.

Zack Demars is The Bulletin's special projects reporter. He grew up in the Pacific Northwest and was a reporter in Eugene and Coos Bay before joining The Bulletin. Outside the newsroom, Demars spends his time looking at mountains and smelling pine trees.