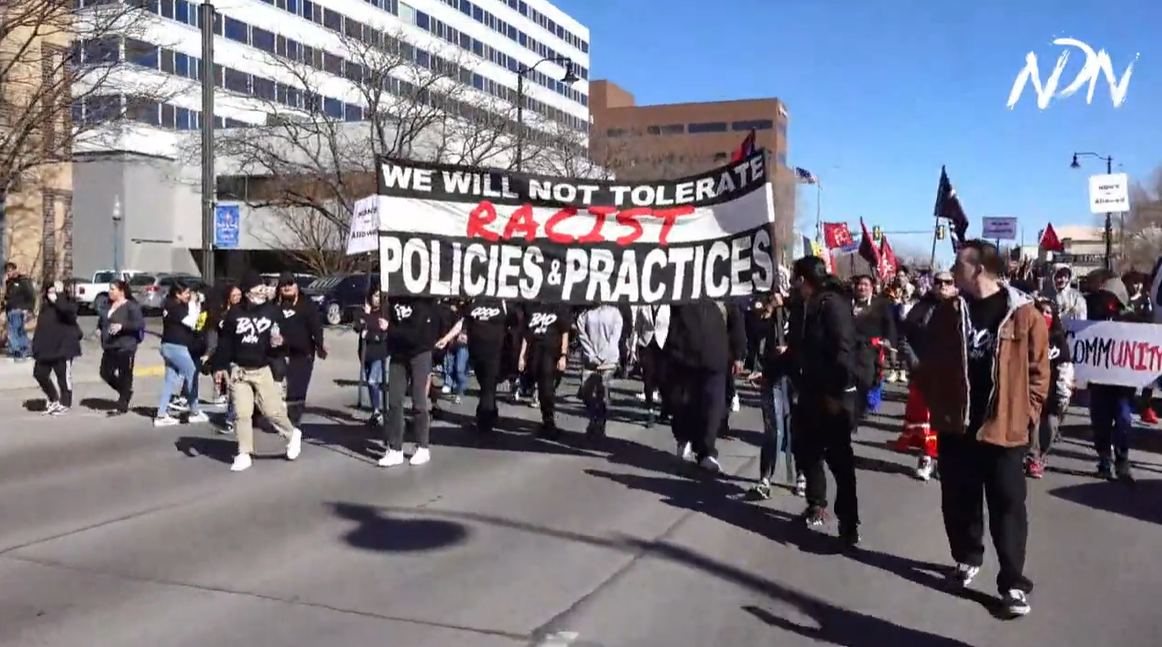 Lawsuit Filed Against Hotel That Called for Banning Native Americans

A social media post from an owner of a South Dakota hotel attempting to ban Native Americans from the property following a weekend shooting drew quick condemnation from tribal leaders, advocates and the city's mayor, as well as a lawsuit.

Connie Uhre, one of the owners of the Grand Gateway Hotel in Rapid City, said in a Facebook post on March 20 that she cannot "allow a Native American to enter our business including Cheers,” which is the establishment's bar and casino.

Additionally, South Dakota Public Broadcasting obtained an email written by Connie Uhre as part of an email chain between area hospitality managers saying, "I really do not want to allow Natives on property … The problem is we do not know the nice ones from the bad Natives ... so we just have to say no to them!!" According to SDPB, several of the hospitality managers included in the chain responded with criticism to Uhre’s statement, calling it “disgusting” and racist.

That followed a shooting at the hotel early on March 19 involving two teenagers. Rapid City police spokesman Brendyn Medina said both the victim and the shooting suspect are Native American.

“It is foolish to attack a race of people and not all of the issues affecting the society in which we live. This includes racism," Frazier said in a statement. ”The members of the Great Sioux Nation who visit our sacred Black Hills are often subject to this kind of behavior. Those members that choose to live on our treaty territory are often treated as a problem, no matter how we choose to live."

Messages left at the hotel for Uhre and her son Nick Uhre, a manager, were not immediately returned.

Mayor Steve Allender posted a screenshot of Connie Uhre’s comment and said March 21 on Twitter that neither the shooting nor the hotel’s response reflects the city’s values.

“I just felt that I couldn’t be silent and pretend like this is just a harmless venting out of frustration,” he said. “This is an attack on not only the 12% of Rapid Citians who are Native American, but also the larger Native American population nationwide.”

Allender said discrimination based upon race is unlawful in addition to being wrong and heartless.

“This is a much larger issue that they’ll have to defend to someone else, not me,” the mayor told the Rapid City Journal.

On March 23, NDN Collective, the American Indian Movement and Cheyenne River Grassroots Collective organized a march from the Memorial Park Bandshell to Rapid City’s federal courthouse that appeared to have been attended by hundreds.

During the event, the group announced it had filed a federal civil rights class-action lawsuit.

“We will not tolerate racist policies and practices like those demonstrated by the Grand Gateway Hotel. Our communities are struggling and our young people are up against so many challenges and obstacles,” NDN Collective President and CEO Nick Tilsen said in a statement reacting to the hotel owner’s statements and announcing its intent to file a lawsuit. “As we continue tirelessly to find ways to heal and support them, we must put an immediate stop to business owners and politicians who attack our people through discriminatory and white supremacist tactics.”

One banner that read, "We will not tolerate racist policies and practices," stood as a backdrop for tribal leaders and others to talk about the civil rights suit that cites "a policy, pattern, or practice of international racial discrimination against Native Americans."

Brendan Johnson, a former U.S. attorney for South Dakota and lawyer for the plaintiffs, said the "rest of the world" needs to know what's going on in Rapid City. The suit seeks unnamed general and punitive damages.

NDN Collective, the Rapid City-based Indigenous advocacy organization, and Sunny Red Bear, the organization’s director of racial equity, filed the lawsuit on March 23, alleging that the hotel and bar had intentionally discriminated against them for being Native American by not renting a room to them and therefore violated the federal Civil Rights Act.

On March 21, Red Bear and another Indigenous woman entered the hotel and tried to rent a room, according to the complaint. But after starting to process the request, an employee allegedly said she couldn’t rent a room to them because it had stopped renting to people with “local” identification to deal with the negative attention from Connie Uhre’s social media posts.

The next day, a number of NDN Collective representatives entered the hotel and unsuccessfully tried to rent five rooms, according to the complaint. Despite being told that rooms were available, the hotel refused to rent the rooms to the group because of “issues” the hotel was dealing with before a man the complaint alleged was the hotel manager, Nick Uhre, “forcefully demanded” they leave the hotel.

“The Grand Gateway made their announcements that they wouldn’t serve our people ... so what we did was we said, ‘we wanted to call their bluff and see if they would,” and so we sent our people up there,” Tilsen said during the march and rally.  “We’re going to hold them accountable.”

“We're sorry if some members of our community reacted without thinking and said things that don't reflect the values of Cheers, The Hotel, or our customers,” the bar’s post said. “We're committed to being a welcoming, inclusive place for everyone.”

The statement, however, then turned to criticizing criminal justice reforms in Rapid City and Pennington County paid for partly by the MacArthur Foundation. The bar also said crime is “destroying us.”

Rapid City, known to many as the gateway to Mount Rushmore, is home to more than 77,000 people. According to the U.S. Census Bureau, at least 11 percent of its residents identify as American Indian or Alaska Native. The surrounding area and nearby Black Hills are also the traditional homelands of many Indigenous nations and were once part of a “Great Sioux Reservation'' that the U.S. government stole in what the U.S. Supreme Court called a “dishonorable” dealing, the Oglala Sioux Tribe said in a statement criticizing Uhre’s racist statements.

Uhre's post and the tense reaction it attracted is the latest incident involving fragile race relations in Rapid City.

A demonstration in the city last Fourth of July called for better treatment of Indigenous people by police and others.

In its statement, the Oglala Sioux Tribe condemned Connie Uhre’s “racist and discriminatory” statements and called on her to apologize.

At the March 23 march and rally, Oglala Sioux Tribe President Kevin Killer said he had experienced discrimination as a young man where he worked and eventually sued the business — and won – after it tried to force him and another Indigenous man to cut their long hair. He said it was important to draw attention to incidents like the one involving Connie Uhre to protect people’s rights and prevent them from happening again.

“It’s important we remind people of our history and place to this region,” he said in the statement. “Moving beyond this type of thinking will help our communities to collectively heal and set a better path for future generations to work together.”

The Associated Press contributed to this report.