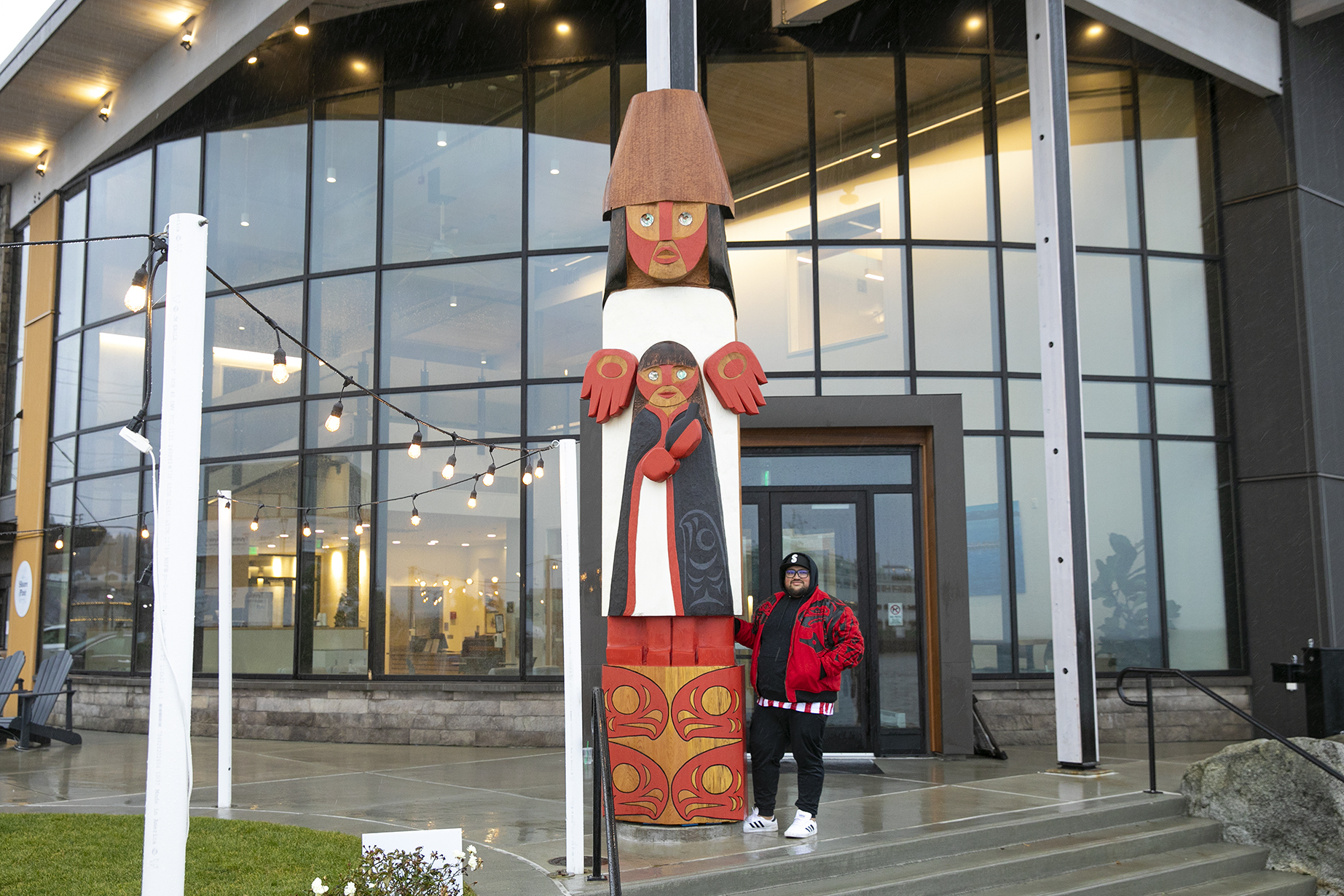 Our Heritage Is a Gift

A 15-foot-tall woman with piercing eyes stares out over the Salish Sea.

From her vantage point, she faces the Edmonds ferry dock, then the sea, and off in the distance, the Tulalip Reservation.

When the Edmonds Waterfront Center commissioned Ty Juvinel to carve a welcome figure, he knew he wanted to dedicate it to mothers — to the matriarchs by blood or by happenstance — who guide and strengthen communities.

“Mothers, grandmothers, they can see the potential you have that you don’t know yet,” said Juvinel, a member of the Tulalip Tribes. “They help push you in ways that sometimes you can’t see.”

Cut into a single, 500-year-old cedar log shipped down from Alaska, a grandmother towers with open, outward-facing palms. A young girl with matching iridescent eyes stands at her feet. Perched atop a base of salmon depicted in the Coast Salish style, the grandmother has handed the girl a traditional toy rattle, thus passing down her heritage.

“Our heritage is a gift,” Juvinel said. “And grandmothers are the pinnacle of knowledge.”

Juvinel named the figure Kayə’s Gift, using the Lushootseed word for grandmother. Lushootseed is a Native language spoken by tribes in the Puget Sound region, including those whose descendants now live on the Tulalip Reservation.

After Juvinel’s father left when he was 8 years old, his grandmother Grace Goedel stepped in to raise him and his brothers, dutifully taking the kids to the bus stop each morning. In the evenings, when Juvinel’s mother would study medicine at the University of Washington, his grandmother would wait to walk them home.

At 11 years old, she put a set of carving tools in Juvinel’s hands. His grandfather taught him to carve a paddle, using bent blades, gouges and adzes to whittle away at the wood. He still has that paddle today — its Coast Salish salmon and bear designs peering up from the blades.

Goedel taught her grandchildren to have pride in their Indigenous heritage. She remembered her own grandmother, who only spoke Lushootseed, carrying Goedel on her back in a shawl while berry-picking or dehydrating clams — details she shared in a video for the Tulalip History Project. Juvinel has carried those stories with him and into his artwork.

But in his teens, he strayed from art.

“When I was younger, I was into fake stuff — trying to be a hoodlum or whatever,” Juvinel said, looking exasperated at the memory.

He worked in construction for a bit before deciding to go to school for audio-visual design. But as he prepared his final portfolio for graduation, tuition increased. Juvinel couldn’t afford to stay. He left one semester shy of graduating.

He found work with the Tulalip Tribes, and in doing so, found art again. Juvinel started “with the small stuff,” making paddles, rattles and masks. He spent time at the Boys and Girls Club and Hibulb Cultural Center where he gave his art away.

“People never understand why I give away art for free,” Juvinel said. “I don’t want my art to just sit on someone’s mantle because they like the look of Coast Salish art. I want a child to play with the rattle. To interact with the culture.”

Winter air whistled through the cracks in the walls of Juvinel’s workshop Thursday on the Tulalip Reservation. Sitting near a portable heater, he brushed strokes of red into the eye of a Seattle Kraken logo he’d painted atop a handmade traditional drum. He planned to give it to the Kraken’s mascot as a gift to use on game day.

Juvinel explained that local teams imitate Native artwork, but they don’t actually showcase Native-made pieces often. If the Seattle Seahawks or Kraken are open to having Native-made artwork in their stadium, he is happy to provide.

“Our legends, our stories … it’s all put into wood grain. Our community carries that legacy. If you take the community out of it, then it’s not genuine — it’s a product,” Juvinel said. “We’ve gone away from community to ‘me.’ Phones are catered to the user … my wants. But during the pandemic, we survived through our communities.”

Wood dust lined the shelves of Juvinel’s studio. Handed down through different families, even his home is a product of his community. He stepped through the studio’s doorway and pointed up the street where you can just make out the red headstone of the Snohomish Chief William Shelton, reminding him of his heritage.

Through the pandemic, Juvinel worked on Kayə’s Gift for two years: planning, sketching, waiting for the wood to arrive — and then finally carving.

The figure’s size forced Juvinel to work outside. Rain or shine, he cut away at the wood, hands cramping. Just thinking about the project hurts his back.

On Oct. 28, Kayə’s Gift “awakened” for the first time as she was finally stood up at the waterfront center.

Edmonds resident Diana White happened to swing by the center as Juvinel prepared to share his story. Through the center’s massive picture windows, the sea roiled gray and unruly, rain whipping against the glass. The figure’s captivating eyes made of abalone — the pearly blue shell of a marine snail — shone with sea spray.

“She’s looking out, facing the water, which is beautiful,” White said staring up at the welcome figure. “She’s a steward of the orca and the salmon. She welcomes all those off the ferry.”

“I’m a Native person,” White said. “I live in Edmonds, but I don’t see anything that reminds me that we’re still standing. But she does.”

Lead image: Ty Juvenil stands beside the towering welcome figure that he created for the Edmonds Waterfront Center on Friday, Nov. 25, 2022, in Edmonds, Washington. (Ryan Berry / The Herald)

Kayla J. Dunn is a reporter at the Everett Herald. She can be reached at 425-339-3449 or kayla.dunn@heraldnet.com. Find her on twitter: @KaylaJ_Dunn