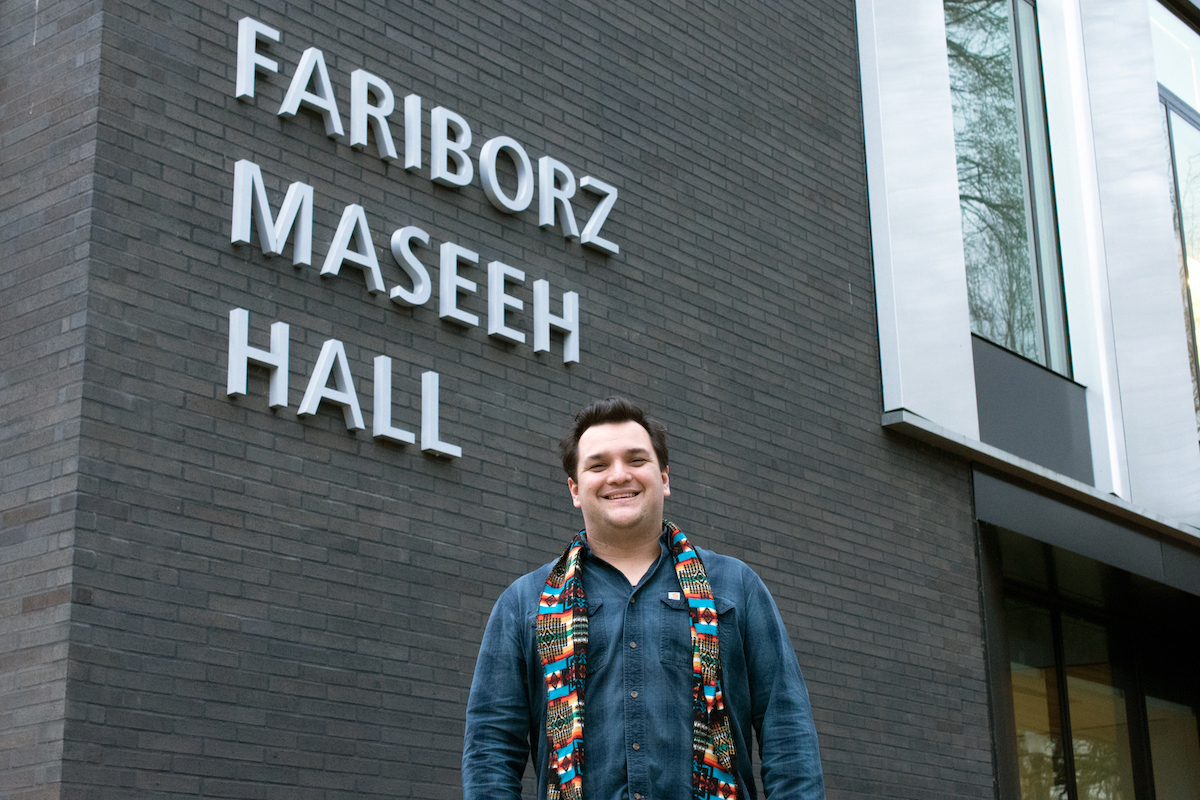 Benjamin Parker is one of only three dozen Indigenous mathematicians in the U.S. who have completed the field's most advanced degree, although that number is beginning to grow more rapidly.

Those two escapes were among Benjamin Quanah Parker’s go-to ways to relieve stress and decompress from the rigors of completing a Ph.D. in mathematical sciences.

Now, with a doctorate in hand and a good job, he can start building a future in which that log cabin becomes more of a reality than a daydream.

Parker, a member of the Squaxin Island Tribe in Washington and also Turtle Mountain Ojibwe, Cree, Shoshone-Bannock, successfully defended his dissertation — entitled “Error Propagation and Algorithmic Design of Contour Integral Eigensolvers with Applications to Fiber Optics” — in December to become the first Native American to earn a Ph.D. in mathematical sciences from Portland State University, joining a small but growing group of Indigenous mathematicians with doctorates in the U.S.

After graduating, Parker took a month off before beginning a job in early February as a software research and development engineer at Intel. Despite giving himself a month to readjust to life outside of academia — a self-care effort that included going to a Portland Trailblazers game and joining a fitness group — Parker said it still feels strange to be done with school after more than five years of working toward his Ph.D. and years of higher education before that.

“It’s actually still a little surreal and still sinking in,” he said. “This was kind of a long journey in the making.”

Parker, 33, grew up in Washington and attended Dartmouth College for his undergraduate studies. He earned a master’s degree in New York, spending about six years on the East Coast. He wasn’t sure he wanted to continue in academia and returned to the Pacific Northwest for a couple of years to teach and work. Then he got an “itch” to get back into school because he missed research and solving problems “for fun” and decided to pursue a Ph.D.

In addition to daydreaming about his ideal log cabin, Parker unwound from the stress of his studies and kept motivated by sticking to a routine that included a balance between research and personal time, spending time at PSU’s Native American Student and Community Center and trying to compile a list of Indigenous people with doctorate degrees.

Parker then discovered that a website called Indigenous Mathematicians had recently done something similar by assembling a list of all Indigenous people with a Ph.D. specifically in math. Now, Parker is among the 37 names nationwide — and the second added in 2021 — on that list. Another five are anticipated to graduate this year, with 56 projected by 2026.

Knowing that there are other Native Americans who have gone through the stress and challenges of completing a doctorate was reassuring, Parker said.

“It's just that solidarity in the struggle,” he said. “It's nice to know that other people have been through this and that they know what it's like.”

Eventually, Parker said he’d like to help guide students like him in the future. For now, he wants to give himself some space to digest his experience.

Doctorates are different than other graduate degrees, according to Parker’s faculty advisor, Jay Gopalakrishnan. That’s because successfully completing a Ph.D. requires the student to contribute to the advancement of their chosen field. Math can be even more challenging because the student has to find a new solution to a problem.

Gopalakrishnan said Parker stood out because of his work ethic, efficiency and professionalism.

While Gopalakrishnan has advised eight other Ph.D. students, most of them from underrepresented backgrounds, he said there aren’t enough people from diverse backgrounds with advanced degrees in the math field despite his and PSU’s emphasis on working with those students.

Gopalakrishnan, a mathematics professor at PSU who studies scientific computation, numerical analysis, and multigrid and fiber optics, said Parker had a closer connection to his family than other students he has mentored. For example, Parker’s family attended his first conference presentation even though they probably didn’t understand much of his work.

“I could see how important it was for them to see Ben succeed,” Gopalakrishnan said. “And Ben himself takes a lot of pleasure and satisfaction in seeing that he is appreciated among his community. That was something that I had not seen in other students.”

Gopalakrishnan said the experience helped him better understand how important Parker’s Indigenous heritage was to him and how close many families are in Native American communities.

Parker said his new job is tangentially related to his Ph.D. research, which involved lasers and fiber optics, but he will still need time to learn the “ins and outs.” He chose to go into the private sector because of a better balance between work and free time while still giving him the opportunity to conduct research and solve problems.

Parker still lives in southwest Portland and plans to stay in the Pacific Northwest. He would like to have a house someday where he could build a longhouse in the backyard and hopes to take language lessons to learn more of the Lushootseed language, as well as some Ojibwe.

He doesn’t know where yet, but he also wants to someday build that log cabin. He envisions it as a place where he “can go or get some quiet peace and respite,” along with family and friends. But no different than finishing his Ph.D., he said he’ll have to be patient for that dream to be realized.

“I haven’t even got my first paycheck yet, so I have to save up,” Parker said.