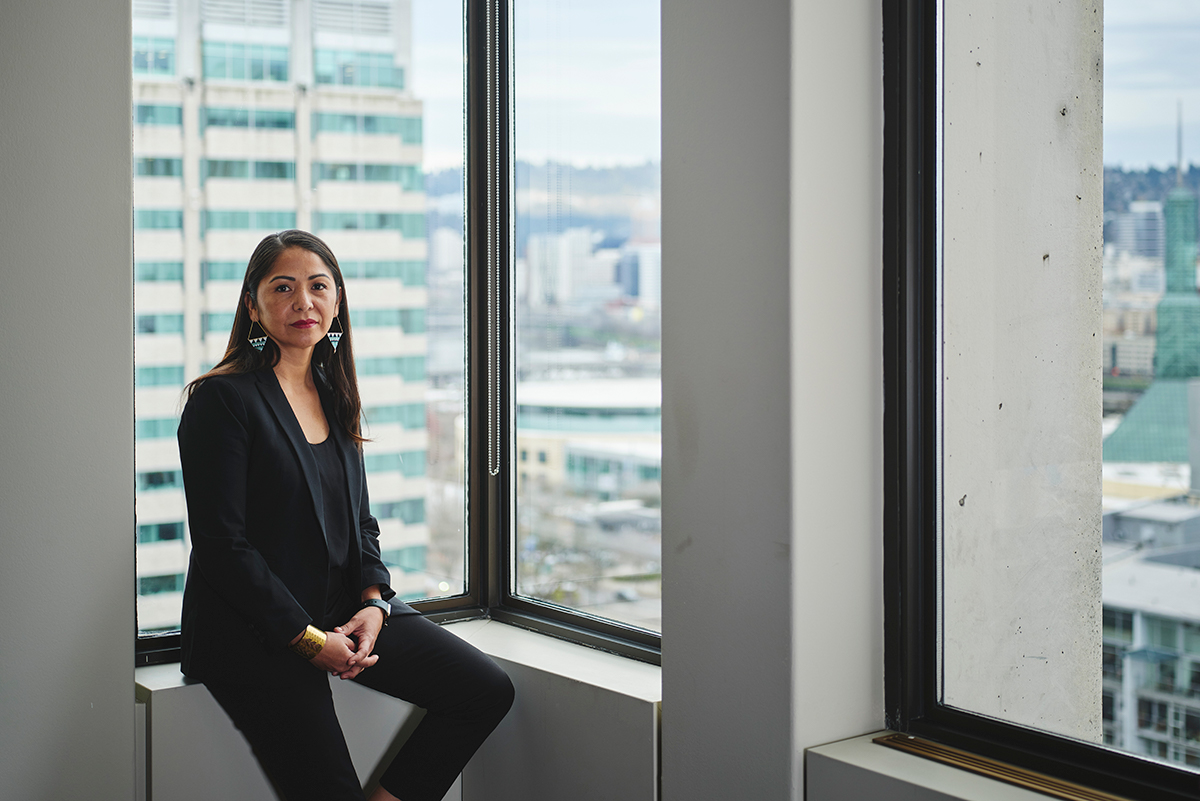 Aja DeCoteau becomes the Columbia River Inter-Tribal Fish Commission’s leader at a pivotal time for the future of the river and salmon.

Aja DeCoteau grew up on the Yakama Indian Reservation in Washington, and she fondly remembers fishing in the Columbia River Basin and hunting with her family as she learned about the importance of Indigenous First Foods.

Still, she thought she’d end up working as a medical doctor someday.

But after high school she got a job with her tribe’s forestry department, and then during breaks and summers in college, she kept finding herself working in natural resources.

“I have great memories of going hunting with my brother and sister and trout fishing with my dad. I feel like I've always had an interest in my environment,” she said in a recent interview. “And, of course, knowing the importance of what we call First Foods to our culture and our religion is something that has always been a part of who I am.”

Those summers working in forestry for her tribe led her to a career in natural resources instead of medicine. Eventually, that led her to the Portland-headquartered Columbia River Inter-Tribal Fish Commission (CRITFC), which represents the interests of the four Columbia River treaty tribes in policy, advocacy and management of the basin. And now, 12 years after joining that organization, she was recently named its executive director, marking the first time a woman has ever held the position.

The organization announced DeCoteau as the new executive director on Nov. 1 after she had served in the role on an interim basis since April, after the previous executive director, Jaime Pinkham, was appointed to a high-ranking job with the federal government.

It’s a position that DeCoteau — who is a citizen of the Confederated Tribes and Bands of the Yakama Nation and is a descendent of the Cayuse, Nez Perce and Turtle Mountain Band of Chippewa Indians — said she’s always wanted to hold since coming to CRITFC.

“I am honored and excited to lead CRITFC and work together with our member tribes to bridge traditional knowledge, scientific expertise and cultural connection to ensure that we have salmon and other natural resources for generations to come,” DeCoteau said.

While DeCoteau said she’s excited for the opportunity — and honored to be the first woman leader of CRITFC in its nearly 50-year history — she takes over at a pivotal time for the organization amid a series of challenges, including climate change, dwindling salmon populations and questions over the future of dams and hydropower along the Columbia River. She’ll be tasked with guiding CRITFC through those challenges by working with a diverse range of organizations and interests — from agriculture to shipping to recreation — with a stake in the watershed’s future.

For CRITFC, the ultimate goal is ensuring the health of salmon populations for future generations. DeCoteau said salmon are not only important economically for many tribal citizens, but are also central to the culture of the four tribes that make up CRITFC, as well as many other tribal nations in the Pacific Northwest. She noted that salmon coming through the lower Columbia River last year numbered about 1.3 million. In 1855, an estimated 17 million salmon swam up the river.

“There is a long road ahead of us,” said CRITFC Chair Quincy Ellenwood (Nez Perce). But, he added, “I have the ultimate confidence in her.”

DeCoteau received bachelor of arts degrees in Environmental Studies and Native American Studies from Dartmouth College and a Master’s of Environmental Management from Yale University. As an undergraduate, she wrote her senior thesis on salmon but still had no idea she would go into fisheries work.

After various roles in natural resources, including as a wildlife biologist and as an environmental program manager with the Yakama Nation, DeCoteau landed at CRITFC, where she’s spent most of her 12-plus years as the watershed department manager, overseeing the implementation of a tribal salmon restoration plan and coordinating the organization’s climate change research and response, among other responsibilities.

“It wasn't really intentional to go into fisheries work, but it's always been a part of my work and my education without me realizing it,” DeCoteau said.

She’s excited to lead an organization that plays such an important role in the future of the Columbia River Basin, particularly in light of how many other Indigenous people are being chosen for prominent roles, including Deb Haaland as U.S. Secretary of the Interior and Chuck Sams, an Oregon native and citizen of the Confederated Tribes of the Umatilla Indian Reservation, who was recently confirmed to lead the National Park Service.

“There are all these great appointments going on in Indian Country,” DeCoteau said, characterizing the trend as “amazing.”

The commission that governs the organization is also represented by the four tribes. That commission acts only when a consensus is reached. In a press release, CRITFC said the committee chose DeCoteau because of her experience and how she led the agency as interim executive director.

DeCoteau also sits on the board of trustees for Earthjustice, the board of directors for Columbia Land Trust and Portland Energy Conservation, Inc., and the board of advisors for WorldOregon.

“It is an honor as we see more and more Native American women take leadership roles nationally, in our tribal governments and in the care and management of our First Foods,” said CRITFC Treasurer Jeremy Takala (Yakama Nation). “Aja will carry on the tribal vision of putting fish back in the rivers that this organization has been working toward for nearly 50 years.”

In 1855, four Columbia River tribes entered into treaties with the federal government that guaranteed fishing rights on their traditional homelands. But, according to CRITFC, those rights were continually encroached upon until the 1960s and 1970s when legislative actions and court rulings began to affirm the original treaty rights.

With strengthened rights came the need for a unified voice among tribes and more expertise and management of Columbia River fisheries, at a time of declining salmon populations.

In 1977, the four Columbia River treaty tribes formed CRITFC to advocate on their behalf around policy and upholding treaty rights, as well as provide fisheries management assistance and research. Today, the coordinating agency has more than 130 employees, including lawyers, policy analysts, biologists and even police officers who work to enforce fishing regulations and protect tribal fishers.

Broadly, CRITFC’s priorities are to put fish back in the rivers, protect treaty fishing rights, share salmon culture, and provide direct services to tribal members who fish along the Columbia River. That could mean conducting research and coordinating management among tribes, working with lawmakers to ensure member tribes receive adequate funding for management and infrastructure projects, and working to ensure treaty rights are honored.

More recently, with the COVID-19 pandemic, DeCoteau said CRITFC expanded its mission to provide additional services, such as partnering to outfit and operate a mobile medical van for tribal fishers at the 31 in-lieu and treaty fishing access sites along the Columbia River, which are often far from tribal lands and resources. The federal government established these treaty-guaranteed fishing access sites, beginning in the 1990s, to compensate the tribes for the loss of traditional fishing spots after they were inundated by water with the construction of the Bonneville Dam in the 1930s.

Much has changed since CRITFC’s earliest days, and even in the dozen years since DeCoteau started working there. For example, she said the effects of climate change, and recognition of the challenges it poses for the future, are now at the forefront of the organization's actions.

“When I first started, we had been working with the tribes and talking about climate change, but it wasn't elevated to a level in national or international dialogue that it is today,” DeCoteau said. “And I think that's something that is completely different. And rightly so, because especially for us, our natural resources are our cultural resources.”

Whether it’s a question over the future of hydropower and dams in the Columbia River Basin, how to better provide services to Indigenous fishers or how to address climate change and manage fish populations, all decisions will have a foremost priority in mind: increasing the number of salmon and other fish in the Columbia River and its tributaries.

“I see Aja as a really strong leader, a really dynamic, important voice for rivers and salmon in the region,” Souers Kober said. “She’s been a great voice to talk about the importance of rivers and salmon to tribes, and everybody who lives here. These rivers are the lifeblood of this region. You can't separate salmon from the Pacific Northwest. And I think it's really important that everybody who lives here understands that.”

As debate over the future of the basin’s dams intensifies, DeCoteau said the organization is finalizing its own “energy vision” report that will make recommendations to address hydropower and dams. She hopes to release the report at the end of the year or early next year.

In addition to increasing the number of salmon and other fish like lamprey in the Columbia River, she wants to spend the next few years growing the number of tribal citizens who work for the organization, tribes or in natural resources and fisheries management. That’s where, she said, CRITFC’s outreach and education components come into play.

“Getting interest from kids at a young age in natural resources, and fisheries in general, will benefit us in the future, too,” she said. “The next [CRITFC] executive director down the road might be some kid who went to salmon camp and really loved it.”