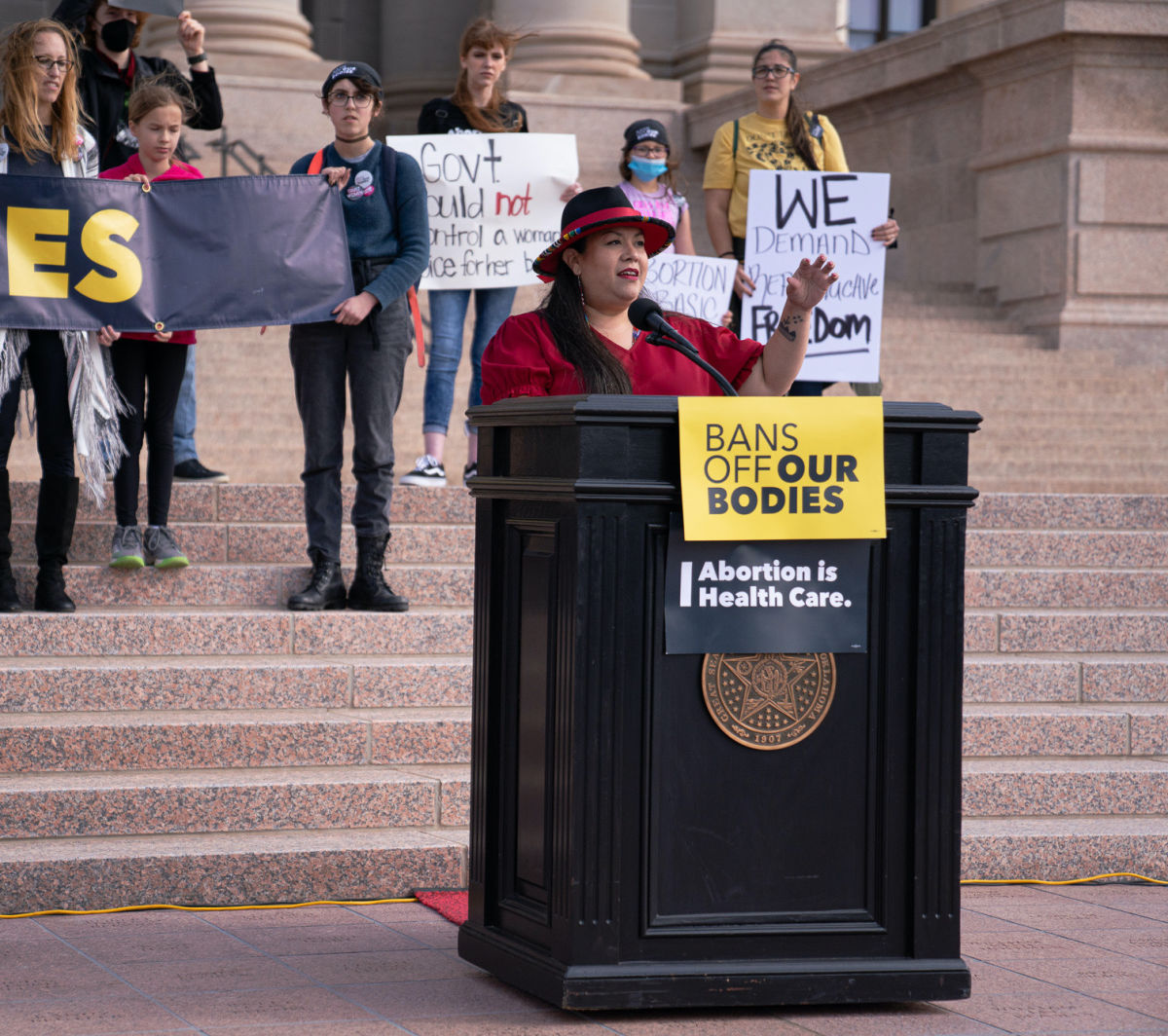 Activists say overturning Roe v. Wade would be another move in a long history of federal policies that have impacted Indigenous people’s right to choose when and if they have children.

Krystal Curley is a mother to three girls. They attend rallies with her and often hear her support for reproductive rights and other critical issues. Curley has taught her daughters about body sovereignty, reproductive justice, and self-determination. Her daughters are acutely aware of issues that impact them, their community, and the world.

Knowing this, Curley, Diné, couldn’t bring herself to tell her daughters before school on May 3, opting to wait until they returned that afternoon, to break the news that the Supreme Court is likely to overturn those rights.

“It's really heartbreaking to be living in a world like this where women are just completely disregarded, completely,” said Curley, executive director for Indigenous Lifeways.

On May 2, a Supreme Court draft opinion leaked to Politico indicated a majority of the court — Justices Samuel Alito, Clarence Thomas, Neil Gorsuch, Brett Kavanaugh, and Amy Coney Barrett — had overturned the rulings in Roe v. Wade and Planned Parenthood v. Casey, the legal footing that guarded a woman’s right to choose. The following morning, Chief Justice John Roberts confirmed the document was authentic and called for the marshal of the Supreme Court to launch an investigation into the leak. An early publication of the court’s thinking is unprecedented.

While this move by the Supreme Court would impact all women and people who birth, it will deeply impact Indigenous people who face many barriers to accessing abortion care.

Rachael Lorenzo, Mescalero Apache and Laguna Pueblo, has seen this firsthand as executive director for Indigenous Women Rising, one of the only Indigenous abortion funds in the country.

“Wealthy, White women, in particular, will always be able to access abortion even after Roe. They can go overseas if they needed to, but our people can’t,” Lorenzo said. “Since it dropped last night, it was more a frustration with the rhetoric, rather than the opinion itself, because we already saw this coming.”

Indigenous women and people who give birth have always fought for reproductive rights. This is not a new issue for Indigenous communities, especially those in rural areas, even after Roe v. Wade became the law of the land.

“The reality is that Indigenous people have been fighting for reproductive rights since colonization,” Lorenzo said. “Since Columbus got here, our ancestors were enslaved. Our children were forcibly separated all the way down to taking our kids away, sending them to boarding schools, and forced sterilization by Indian Health Services, which didn't really get acknowledged by the federal government until the Obama administration. We have already been living in a post-Roe reality.”

In 2018, Indigenous Women Rising established an abortion fund to help Indigenous people who birth to help pay for costs associated with having to travel to receive care.

“Now they're having to travel even further and leave elders and children behind and figure out who's gonna care for them while they're gone,” Lorenzo said. “I see that becoming more widespread.”

The overturning of Roe v. Wade is just another move in a long history of federal policies that have impacted Indigenous women’s right to choose when and if they want to have children.

In the 1970s, the Indian Health Service forcibly sterilized or coerced into sterilization at least 25 percent of Indigenous women, and the number could be higher. In 1976, the U.S. Government Accountability Office discovered that 3,406 women were sterilized without their consent, and that 36 were under the age of 21.

Dr. Connie Pinkerton-Uri, Choctaw/Cherokee, started to investigate after she discovered that three of her patients were forced or coerced into sterilization by the health agency. Her independent study found that one in four Indigenous women were sterilized by the agency. She also discovered that the agency targeted “full-blooded Indian women for sterilization procedures.”

In 1976, the Hyde Amendment banned the use of federal dollars for abortion care, meaning Indian Health Service, the largest provider of Indigenous healthcare, couldn’t provide the service.

The three exceptions were in the cases of rape, incest, or the life of the mother being in danger. In New Mexico and Oklahoma, oftentimes those three exceptions are not being acknowledged by local Indian Health Service hospitals.

“Even though they are legally allowed to provide that care, they still don't and every medical director has a different policy that guides their providers when they have a patient who is expressing they want to terminate their pregnancy,” Lorenzo said. “We have been told by providers ourselves that their medical directors tell them that they're not allowed to even mention abortion. They're just supposed to sign them up for prenatal care, and schedule their appointments.”

From 1981 to 2001, Indian Health Service only performed 25 abortions. The Native American Women’s Health Education Resource Center reported in 2002 that 85 percent of IHS facilities were not in compliance with the Hyde Amendment or its own regulations to provide abortion services. Only 5 percent offered on-site abortion care, and none of the pharmacies carried medication for non-surgical abortion.

Abortion at all stages is legal in New Mexico and state Medicaid can be used to cover all medically necessary abortions. However, the right to abortion is not codified into state law, leaving it vulnerable. Across the country, 16 states and the District of Columbia have codified the right to abortion.

In contrast, Oklahoma, home to 39 Indigenous nations, has one of the strictest anti-abortion laws in the country.

“Laws like this absolutely make it harder for Indigenous women in Oklahoma,” said Sarah Adams-Cornell, co-founder of Matriarch. “I really think about our sisters, trans, non-binary people who live in those rural areas where providers are scarce, where facilities are scarce. Where if you don't have enough money to travel to the city to get access, you face a really tough decision about possibly following through with the pregnancy you don't want, or possibly having a back-alley abortion, which absolutely will start happening.

Oklahoma’s anti-abortion law SB 612, signed into law by Gov. Kevin Stitt, Cherokee, makes no exceptions for rape or incest. The bill makes it a felony to perform an abortion, and those convicted could face up to 10 years in prison or fines of up to $100,000. The only exception is to save the life of a pregnant woman in a medical emergency.

“It's going to be devastating for our community, especially when we know that those rates of sexual assault are so high,” Adams-Cornell, Choctaw, said.

While the draft opinion can be alarming to those who support a woman’s right to choose, Elizabeth Reese, Pueblo of Nambé, an assistant professor of law at Stanford University, wants to be clear that it is not written into law.

“This is not the opinion of the court,” Reese said.  “It is still something that is likely being revised and debated by the justices. This might not be, ultimately, what the court puts out as their final decision. The law still has not changed in that regard and will not change. Roe will continue to be the law of the land until this decision is officially put out.”

The chief justice said in a press release that the work of the court would not be impacted by the breach of trust and would not undermine the integrity of the operations.

“I think some immediate steps are to make our general reactions to the decision, as the people of the United States, very clear,” Reese said. “The court does not often like to acknowledge the weight that public opinion has on its decision making. But it certainly does. Since the legitimacy of the court, as an institution, hangs on the idea of all of us believing in its legitimacy and that they have not strayed too far from the norms of law and justice that we expect of them.”

Polling shows relatively few Americans want to see Roe overturned. In general, AP-NORC polling finds a majority of the public favors abortion being legal in most or all cases. Few say abortion should be illegal in all cases.

U.S. Rep. Markwayne Mullin, Cherokee, R-Oklahoma, has come out in support of the possible decision by the Supreme Court, tweeting, “If reporting on the coming Supreme Court decision is accurate, this MONUMENTAL decision will save the lives of millions of babies. I’m humbled to come from a red state like Oklahoma who has taken the lead in this movement to fight for the unborn.”

The final and official Supreme Court decision is not due for another two months. During that time, justices will likely continue to debate this case.

“One thing worth thinking about is what role tribal governments can play in trying to provide these essential services to their citizens on their own territories,” Reese said.

Lead photo: Sarah Adams-Cornell, Choctaw, at the Ban Off Rally and People's Hearing at the Oklahoma State Capitol on April 5, 2022. She co-founded Matriarch, a nonprofit that promotes the social welfare of Native women. Photo by Allie Shinn

ICT’s Aliyah Chavez and The Associated Press contributed to this report.

This story originally appeared on May 3 in Indian Country Today. 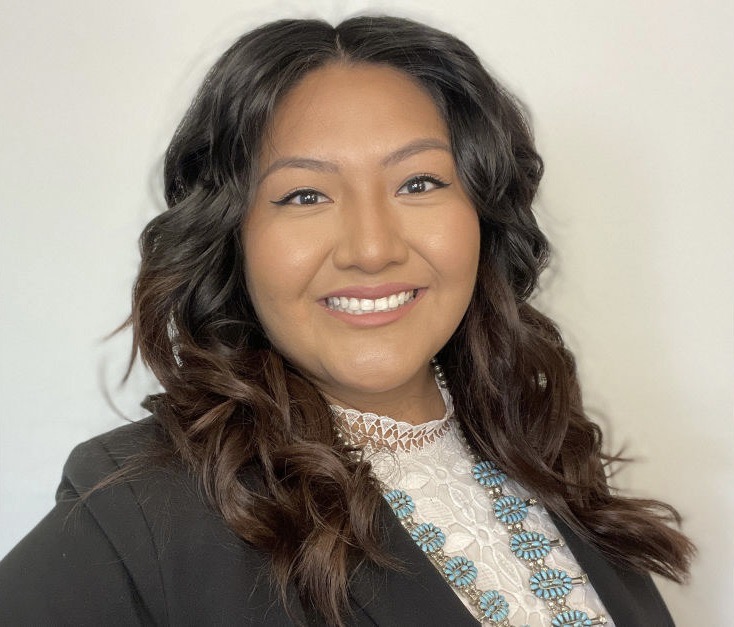 Pauly Denetclaw, a citizen of the Navajo Nation, is Haltsooí (Meadow People) born for Kinyaa’áanii (Towering House People). An award-winning reporter based in Gallup, New Mexico, she has worked for the Navajo Times and Texas Observer covering Indigenous communities, and her radio pieces have aired on KYAT, National Native News, NPR’s Latino USA and Texas Public Radio. She is a board member of the Native American Journalists Association. Follow her on Twitter, @pdineclah.