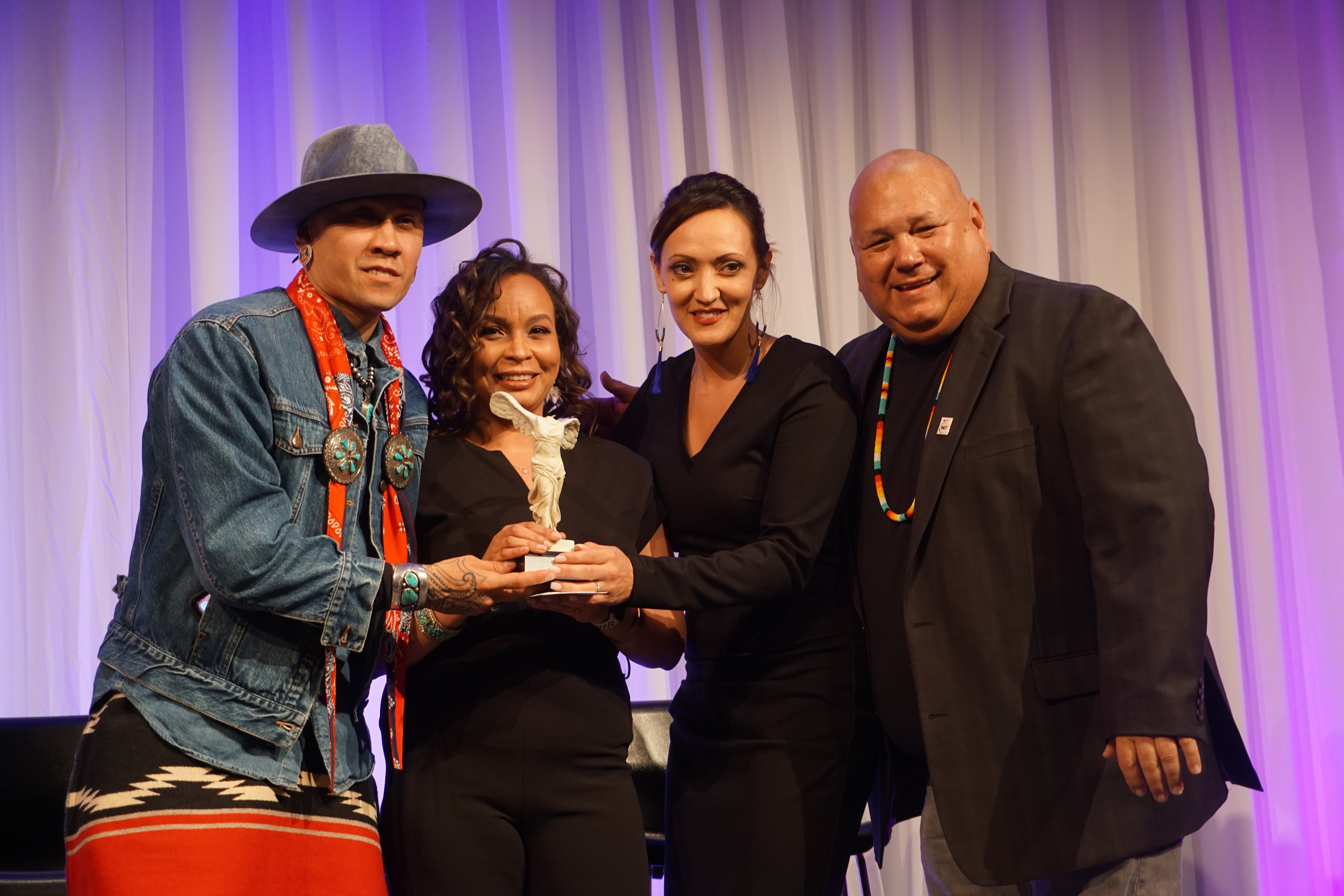 The Man Behind the Nike Air Native N7

Sam McCracken has always put community first, from his years growing up on the Fort Peck Indian Reservation to his work today at Nike headquarters.

McCracken, a citizen of the Sioux and Assiniboine Tribes, was working in Nike’s distribution center in Oregon in 1999 when he proposed a plan for helping Indigenous communities improve health and wellness through physical activity.

The plan grew into the Nike Air Native N7 shoe and retail line – named to honor the principle that today’s decisions will impact seven generations ahead. The N7 line has now generated millions of dollars for hundreds of Indigenous organizations through the N7 Fund.

That’s just how McCracken envisioned it.

“I have always looked to my culture to remind myself of what is most important,” McCracken told Indian Country Today. “The authentic connection I have to the belief that we must consider the impact of all of our decisions on the next seven generations. This is what shaped the concept for Nike N7.”

Today, McCracken is general manager and founder of Nike N7, a division dedicated to supporting Indigenous youth and encouraging them to get active, and he serves as vice chair for the board of the Center for Native American Youth.

He has helped form partnerships between Nike and the Indian Health Service to expand access to sports in tribal communities. He was appointed by President Barack Obama to the U.S. Department of Education’s National Advisory Council on Indian Education in 2010, and has received a slew of awards as a business and sports leader. Most recently, in early 2022, he was honored by the World Economic Forum as the Schwab Foundation’s Social Intrapreneur of the Year.

But he doesn’t forget where he came from, friends and co-workers say.

“Sam is a leader both at Nike and across Indian Country,” Kathy Baird, Sicangu Lakota/Oneida, Nike’s senior director for global communications told Indian Country Today. “His efforts to bring visibility of our community to the mainstream through the N7 collection and beyond is an example of what’s possible for us.”

“His story is a reminder of what we can achieve when we keep community in our hearts.”

McCracken, 62, grew up on a ranch with his family in Fort Peck, Montana.

“The values instilled in me were hard work and dedication, which are a core part of my journey,” he said. “I have always been involved in my community and through celebration and ceremony.”

He played basketball as a youth and went on to coach men’s and women’s high school basketball in California and Oregon for more than three decades. The experiences grounded him on his journey toward the corporate world, he said.

“I was able to see how sport could transform the lives of our youth and provide a platform for our community to achieve happier, healthier lives,” McCracken told Indian Country Today.

“Through this work and seeing the power of sport, I was able to envision a world where tribal communities could feel seen, heard and represented through our efforts at Nike," he said. "This is what led to the idea behind Nike N7.”

He started working for Nike in 1997, and was driving a forklift at the Wilsonville, Oregon distribution center when he was asked to reinvigorate Nike’s Native American Employee Network, one of eight employee groups aimed at promoting cultural awareness.

He realized more could be done to reach out to Indigenous communities, and he spoke to supervisors about his ideas. He then drafted a business plan for the Nike N7, and the proposal was accepted in 2000.

“Our goal was to bring sport — and all the benefits that come with it — to the community with an understanding that each generation of athletes we cultivate inspires the next,” he wrote in an essay on the Nike website.

He took over Nike’s Native American Business in 2000, and began developing the N7 line, starting with a shoe that featured natural fibers, cork and a splash of the color turquoise. It expanded in 2009 with additional products available to the general public.

The Nike N7 Collection now includes shoes, sportswear and special designs for colleges and universities. A special collection, the Nike N7 Spirit of Protection, features a black-and-white hawk feather with turquoise accents. It was inspired by Indigenous athlete Lyle Thompson, a lacrosse player who is serving as a Nike N7 ambassador.

Thompson, a citizen of the Onondaga Nation in upstate New York, was born into the hawk clan, and his Indigenous name is Deyhahsanoondey, means, “He is flying over us,” according to the Nike website. He is the youngest of lacrosse’s Thompson Brothers.

McCracken draws high praise from those who know and work with him.

“He makes himself available to mentor, guide, and support young entrepreneurs," she said. "His story itself naturally inspires others, yet it's his approachable, positive, and driven attitude that makes him a prominent leader in Indian Country. A man above ego and praise, he is the man rooting for you on the sidelines.”

Nikki Pitre, Coeur d’Alene, executive director of the Center for Native American Youth where McCracken serves on the board, said he works tirelessly for Native youth.

“He has advanced our mission, raised youth voices and serves as a role model, mentor and friend to us all,” Pitre said. “He has worked to include Native youth in his work as well as partnered with us on a White House Tribal Youth Summit. We look forward to continuing to grow with the leadership and guidance of Sam.”

Golfer and sports analyst Notah Begay, Navajo/Pueblo, said McCracken’s vision to serve Indigenous youth through culture and sports has had a far-reaching impact.

“Sam and the N7 initiative have brought worldwide recognition to the important challenges facing our Native communities while empowering our youth to be proud of their heritage and pursue a path toward heightened wellness,” Begay said.

“Sam is someone who instantly makes you feel a part of a larger family and purpose,” said Madison Hammond, Navajo and San Felipe Pueblo, a professional soccer player and an N7 ambassador. She was the first Indigenous player in the National Women’s Soccer League.

“His commitment towards excellence is something that I have admired since I became a Nike N7 Ambassador,” Hammond said. “It was really impressive to learn more about his story and how his dedication has had an empowering effect on future Indigenous generations.”

“Sam McCracken is truly an amazing and inspiring individual,” said Powless, of Oneida descent. “I am grateful to know him and to have worked with him and N7 for the last few years.”

“He makes sure you are heard, seen, and supported in every aspect. If you have an idea, Sam will be the first one to say, ‘How can I help make this happen? How can I offer my services to make your idea a reality?’” she said. “He exemplifies what it means to be a leader in his community and work space not because he demands it, but because he leads by example with integrity and true intentions.

“He pushes past barriers that were set for Indigenous peoples and he makes sure to continue to uplift those that support him along the way.”

Michael Spillane, president of Consumer Creation at Nike, said the N7 project is having a broad impact.

“Sam has been an ever-present voice for Native Americans and Indigenous communities in North America,” Spillane said. “His passion, advocacy, and leadership have helped Nike donate over $8 million in grants since 2009, to over 270 communities and organizations focused on getting Native American youth moving. Sam’s tireless and selfless efforts are a great example of how leadership can have a real impact on the lives of so many.”

This story originally appeared on April 27 in Indian Country Today.

Dan Ninham, Oneida, is a freelance writer based out of Red Lake, Minnesota. You may contact him at coach.danninham@gmail.com.