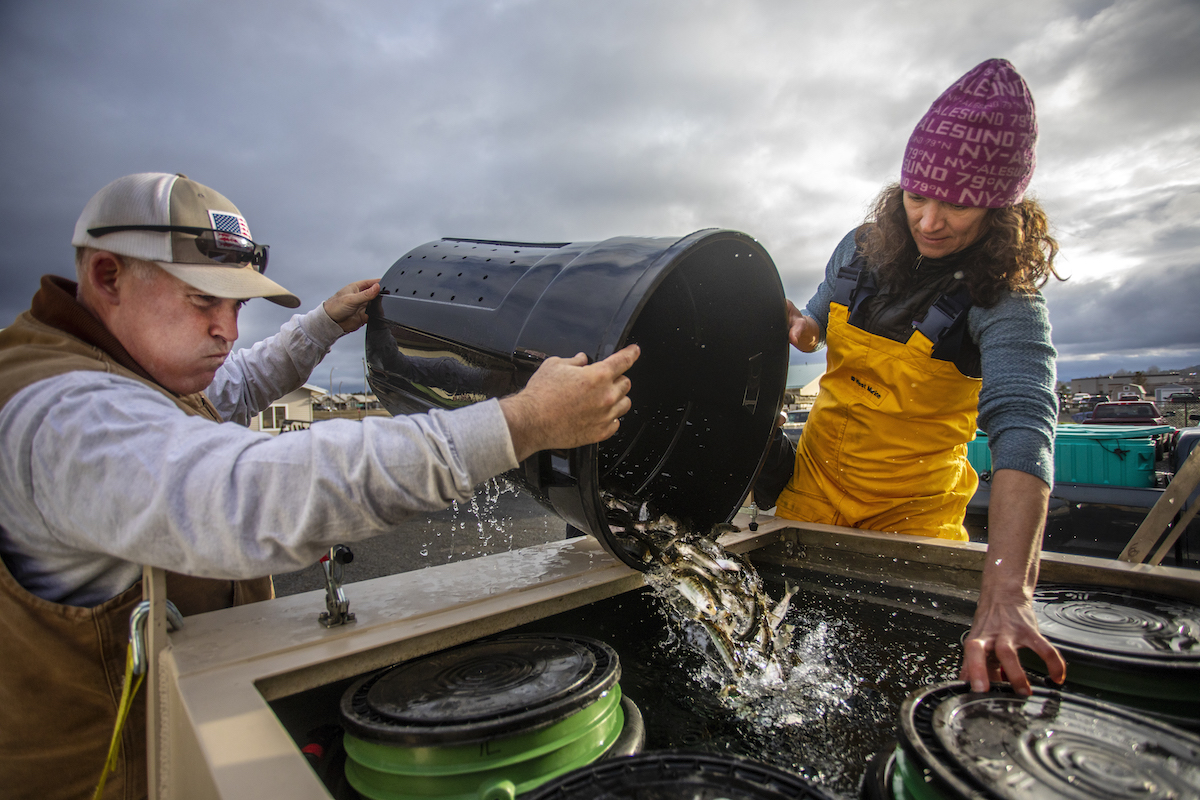 A restored chinook run there could add significantly to the number of anadromous fish in the entire basin.

SPOKANE — With the thousands of miles of quality salmon habitat in the upper Columbia River, a restored chinook run there could add significantly to the number of anadromous fish in the entire basin.

The tribes of the upper Columbia River Basin — the Coeur d’Alene, Spokane and Colville, along with first nations in Canada — aim to do just that.

But it’s tricky. Audacious even.

Consider that salmon and steelhead that return to the Snake River are struggling in large part because of the eight dams they must pass. Those eight dams, four on the Columbia and four on the Snake, all have adult and juvenile fish passage facilities.

There’s honest debate about how well they perform. Many scientists say each of the dams takes a toll and eight is too many, thus their call to remove the four dams on the Snake River as a needed measure to save wild Snake River salmon and steelhead.

But adult fish that return to the upper Columbia River also will have to pass eight dams before they get to Chief Joseph and Grand Coulee — two massive hydroelectric dams without fish ladders. Juvenile fish must make their way through turbines on the two big dams and over spillways or through turbines on three small Avista Corp. dams on the Spokane River, all before passing eight more on the middle and lower Columbia River.

‍How is that possible? Or rather, is it possible?

The tribes think so and they are in the second phase of a four-phase project to figure out how to make it happen. They must do so without the power of the Endangered Species Act.

“We are talking about passing fish across five dams that don’t have fish passage. For sure it’s a daunting task but, you know, that is probably why it hasn’t been tried yet,” said Tom Biladeau, nonresident fisheries program habitat restoration biologist for the Coeur d’Alene Tribe.

“If it were simple, someone would have done it. But the tribes are really committed to making this happen and there are a lot of new or novel technologies out there that weren’t available decades ago to pass fish across high-head dams, and when I talk about passing fish, I’m talking about juveniles going downstream and adults going back up."

Fish have been missing from the Coeur d’Alene territory for a century. But they used to spawn in places like Hangman Creek and other tributaries to the Spokane River. Spokane Falls, an impassable barrier on the Spokane River, was a destination for several tribes.

“Salmon and steelhead would hit there and, just like Celilo and Kettle falls, it would be a place all the tribes would come to harvest fish,” said Aaron Penney, supplementation biologist for the Coeur d’Alene Tribe.

“My people are relegated to getting fish out of the back of a truck,” James said. “All of you who have salmon should be freaking out. Excuse my language, you should be crapping your pants because you don’t want to end up like us.”

“Those were the first ones that started depleting the salmon runs in the Spokane River,” Penney said. “And when Grand Coulee went in, that was the nail in the coffin.”

He has spent his entire career helping salmon reclaim territory. For about two decades, the Nez Perce man worked on his tribe’s efforts to supplement wild salmon and steelhead runs with hatchery fish. Then he managed the Nez Perce Tribal Fish Hatchery. Now, he’s running a nascent hatchery program for the Coeur d’Alene Tribe.

‍Grand Coulee Dam is a high-head barrier with no fish passage. Chief Joseph Dam was built downstream. It also has no fish passage. Together, the two dams are the electricity-producing workhorses of the region.

So the effort is audacious. Undaunted by that, the upper Columbia River tribes are stepping up to the challenge. It starts with a long-timed study that began in 2014 with Phase 1 — an effort by the tribes to assess the quality of salmon and steelhead habitat in what is known as the blocked area.

“The results from that, they were encouraging to say the least,” Biladeau said. “That modeling exercise was estimating tens of thousands of adults could be produced from reintroduction into the blocked area. That is tens of thousands of adult chinook, pushing a hundred thousand adult sockeye. We haven’t gone so much into the exercise estimating how many adult steelhead could be produced, or coho, or lamprey, (but) that is certainly on the horizon.”

Phase 2 began in late March. Fish raised by Penney were released into Hangman Creek, a tributary of the Spokane River, the Spokane River itself and into Lake Roosevelt — the slackwater section of the Columbia River behind Grand Coulee Dam.

Those fish, about 5,000 all together, were tagged so biologists can track their downstream movements. Most had Passive Integrated Transponder, or PIT, tags inserted into their abdominal cavities via a 12-gauge needle. But a small subset was surgically implanted with more sensitive acoustic tags.

The PIT tags can only be detected a short distance from antennas, or arrays, and the detection efficiency ranges from about 10% to 30%, said Toby Koch, a research fish biologist with the U.S. Geological Survey assisting with the study.

“The acoustic tags, we can hear them about 200 meters on average and usually we have better than 95% detection probability on those.”

The downside, in addition to the surgery required to implant them, is the acoustic tags blink out after about 80 days. The signals emitted by PIT tags are triggered only when they pass over an antenna, so they last for years.

Together the tags will show fisheries biologists how juvenile and perhaps adult fish move through the blocked area, the portion of the Columbia upstream of Grand Coulee.

“Phase 2 is largely testing the feasibility of reintroduction,” Biladeau said. “Getting fish in the water, looking at survival, looking at passage routes, looking at behavior and starting to fill in those assumptions in that lifecycle model so we can start making informed decisions going forward on the best way to proceed for reintroduction.”

If reintroduction is successful, it will require figuring ways to get juvenile fish through all of those dams and how to get adults over or around them. New technologies such as the Whoosh system — a giant suction tube for adults — and floating surface collectors for juveniles placed in front of dams, hold promise.

'A lot of opportunity'

‍There is evidence reintroduction might be possible. The Spokane Tribes released 750 juvenile summer chinook in Chamokane Creek in 2017.

That was all to reach the downstream side of Chief Joseph Dam and enter the “anadromous zone,” an area where salmon and steelhead can still reach. Ahead of them was Wells Dam, the first of eight where the fish could be detected.

Farther downstream, 24 were detected at Bonneville Dam and four in the Columbia River estuary.

In the summer of 2019, one of those fish, an adult female that was now fat and strong from feeding in the ocean, started swimming back upstream.

“We watched her as she made her way up past each of the dams,” Giorgi said.

A year later, three more adults from the same juvenile release were detected in the Columbia River. At least one was documented to have been harvested and it’s probable the others were as well.

Giorgi said the 750 juveniles released had a smolt-to-adult return rate of about 0.4%. Not a great survival rate in the big picture, but on par with return rates for threatened upper Columbia River steelhead that year.

“Without any improvements to fish passage systems, no nothing, just an impromptu release that we did, we got a lot of hope out of that,” Giorgi said. “So we see a lot of opportunity, a lot of hope for this reintroduction effort. Yeah, it’s disappointing we didn’t get those three fish back but, at the same time, it also articulates the benefits of reintroduction. That we can have this cultural connection while also contributing to downstream fisheries where other people benefit as well, it’s a lot bigger than just the upper Columbia River region.”

A later release of 1,400 chinook smolts by the Coeur d’Alene Tribe showed about 90 of those fish survived downstream passage of all three Spokane River dams, as well as Grand Coulee, Chief Joseph and the eight dams on the middle and lower Columbia River.

Phase 2 will be repeated and expanded to include adult tracking in future years, all in an effort to learn what can be done to help the fish.

Giorgi said the tribes believe they can pull it off and do so without the benefits of the Endangered Species Act.

“We are not telling anybody they have to do this. We are not asking for operational changes, we are not asking for increased drawdown, more spill, reduced irrigation water power, whatever. You maintain all of those current operations and benefits and let’s see what we can get for salmon while still providing those services, and right now the outlook is optimistic.”

Lead photo: Tobias Koch and Jill Hardiman pour a tub of fish that were soon to be released into the Spokane River on March 18 in Plummer, Idaho. Photo by August Frank/Lewiston Tribune

Eric Barker is the outdoors and environmental editor of the Lewiston Tribune. He may be contacted at ebarker@lmtribune.com or at (208) 848-2273. Follow him on Twitter @ezebarker.