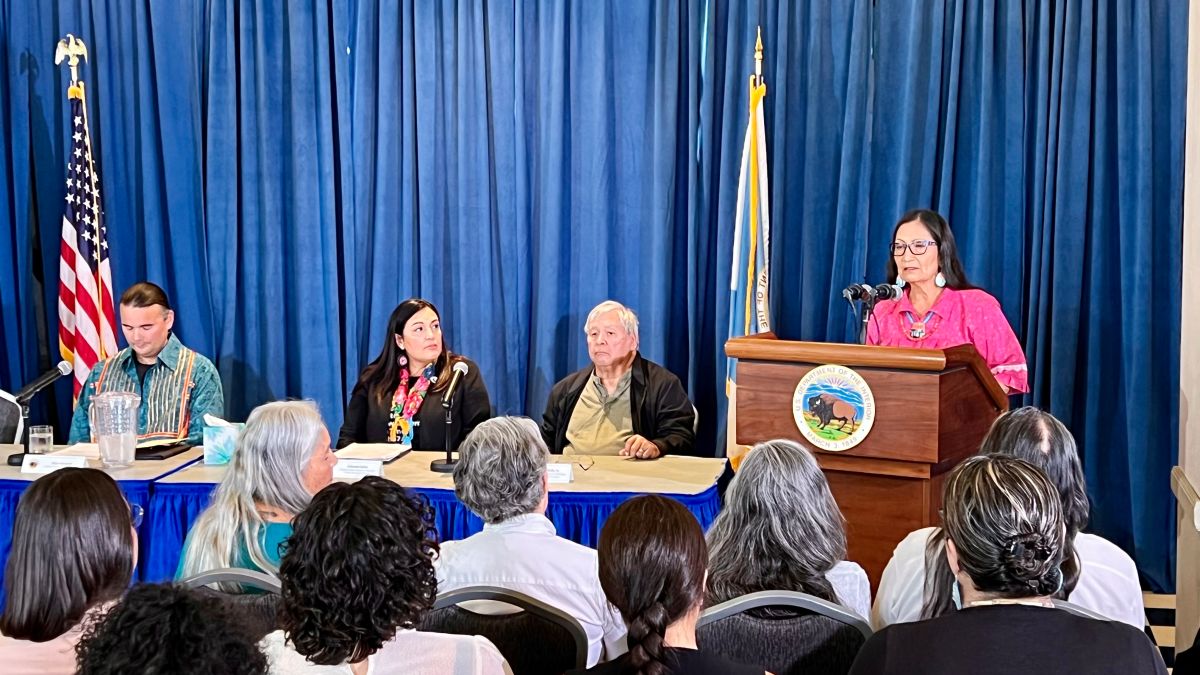 The findings show the federal Indian boarding school system consisted of at least 408 federal schools across 37 states and that roughly 53 different schools had been identified with marked or unmarked burial sites.

The U.S. Department of Interior released its investigative report May 11 on the Federal Indian Boarding School Initiative. It’s being called the first volume of the report and comes nearly a year after the department announced a “comprehensive” review.

Interior Secretary Deb Haaland, Bryan Newland, assistant secretary for Indian Affairs, Deborah Parker who is the chief executive officer of the National Native American Boarding School Healing Coalition and James LaBelle Sr., a boarding school survivor and the first vice president of the coalition's board, spoke at a news conference in Washington announcing the report’s findings.

“The consequences of federal Indian boarding school policies — including the intergenerational  trauma caused by the family separation and cultural eradication inflicted upon generations of  children as young as 4 years old — are heartbreaking and undeniable,” Haaland said in a statement. “We continue to see the evidence of this attempt to forcibly assimilate Indigenous people in the disparities that communities face. It is my priority to not only give voice to the survivors and descendants of federal Indian boarding school policies, but also to address the lasting legacies of these policies so Indigenous Peoples can continue to grow and heal.”

Newland led the over 100-page report, which includes historical records of boarding school locations and their names, and the first official list of burial sites.

The findings show from 1819 to 1969, the federal Indian boarding school system consisted of 408 federal schools across 37 states, some territories at that time, including 21 schools in Alaska and seven schools in Hawai’i. Some of these schools operated across multiple sites. The list includes religious mission schools that received federal support, however, government funding streams were complex therefore, all religious schools receiving federal, Indian trust and treaty funds are likely not included. The final list of Indian boarding schools will surely grow as the investigation continues. For instance, the number of Catholic Indian boarding schools receiving direct funding alone is at least 113 according to records at the Bureau of Catholic Indian Missions.

About 50 percent of federal Indian boarding schools may have received support or involvement from religious institutions or organizations including funding, infrastructure and personnel, Newland said.

The federal government, at times, paid them on a per capita basis for the children to enter into the schools.

Approximately 53 different schools had been identified with marked or unmarked burial sites. The department expects the number to increase as the investigation continues.

In June 2021, Haaland announced an Interior investigation in federal Indian boarding schools to make “a comprehensive review of the troubled legacy of federal boarding school policies” from as early as the 19th century.

She said the initiative was created after the discovery of 215 unmarked graves of Indigenous children by Canada’s Tk’emlúps te Secwépemc First Nation at the Kamloops Indian Residential School in May 2021.

The first volume of the report highlights some of the harsh conditions children endured at the schools. Children’s Indigenous names were changed to English names; children’s hair were cut; the use of their Native languages, religions and cultural practices were discouraged or prevented; and the children were organized into units to perform military drills.

The report cites findings from the 1928 Meriam report in which the Interior acknowledged “frankly and unequivocally that the provisions for the care of Indian children in boarding schools are grossly inadequate.

Examples included descriptions of accommodations at select boarding schools such as the White Earth Boarding school in Minnesota where two children slept in one bed, the Kickapoo Boarding School in Kansas where three children shared a bed and the Rainy Mountain Boarding School in Oklahoma where, “single beds pushed together so closely to preclude passage between them and each bed has two or more occupants.”

The 1969 Kennedy Report, cited in the Department investigation, noted that rampant physical, sexual and emotional abuse: disease; malnourishment; overcrowding,; and lack of health care at Indian boarding schools are well-documented.

(Related: ‘We won’t forget about the children’)

In a major finding, the report documents the use of tribal trust and treaty funds for the federal boarding school system as well as mission schools operated by religious institutions and organizations. Although the total amount of these funds used to directly fund schools is unknown, according to an investigation by Indian Country Today, more than $30 million in today’s dollars were siphoned away during a nine year period by Catholic schools alone.

The U.S. also set apart tracts of Native lands for use by religious institutions and organizations. According to an ongoing investigation by Indian Country Today, a large portion of this land may still be held by churches.

Indeed, the relationship between major religious denominations and the federal government regarding Indian mission schools is described as “an unprecedented delegation of power to church bodies that were given the right to nominate new agents, direct educational and other activities on the reservations.

Although the report makes little mention of accountability for religious organizations that operated boarding schools, it does indicate that non-federal entities will be given support in releasing their records associated with the schools.

Parker said the organization's collaboration with the Interior found an additional 89 boarding schools that did not receive any federal funding.

As part of the initiative and in response to recommendations from the report, Haaland announced the launch of “The Road to Healing” year-long tour. It’ll consist of a tour across the country to allow boarding school survivors to share their stories, help connect communities with trauma-informed support and to gather a permanent oral history.

The report also points to the 2019 watershed Running Bear studies, funded by the National Institute of Health. This research contains the first medical studies to systematically and quantitatively show that the Indian boarding school system experience continues to impact the present day health of adult boarding school survivors.

Newland cited the need for more investigation because of the COVID-19 pandemic and its resulting closures of federal facilities that affected obtaining and reviewing documents and the department’s limited funds at that time.

(Related: ‘Our ancestors risked their lives and freedom’)

The second volume will be aided by a $7 million investment from Congress through fiscal year 2022. Newland recommended for it to include a list of marked and unmarked burial sites at federal Indian boarding schools — with names, ages, tribal affiliations of the children at those locations — an approximation of the total amount of federal funding used to support the boarding school system and to further probe the impacts on Indigenous communities.

“This report presents the opportunity for us to reorient federal policies to support the  revitalization of Tribal languages and cultural practices to counteract nearly two centuries of  federal policies aimed at their destruction,” Newland said in a statement. “Together, we can help begin a healing process for Indian Country, the Native Hawaiian Community and across the United States, from the Alaskan tundra to the Florida everglades, and everywhere in between.”

On Thursday, members of Congress are holding a hearing at 1 p.m. ET, for the bill “Truth and Healing Commission on Indian Boarding School Policies in the US.” Rep. Sharice Davids, Ho-Chunk, is the lead sponsor of the bill.

The National Boarding School Healing Coalition is requesting people who attended a boarding school or are a descendent of a boarding school attendee to submit their written testimonies to the House of Natural Resources Committee by May 26. Email submissions to  HNRCDocs@mail.house.gov and CC NABS at info@nabshc.org.

The National Boarding School Healing Coalition has an available template to use here. 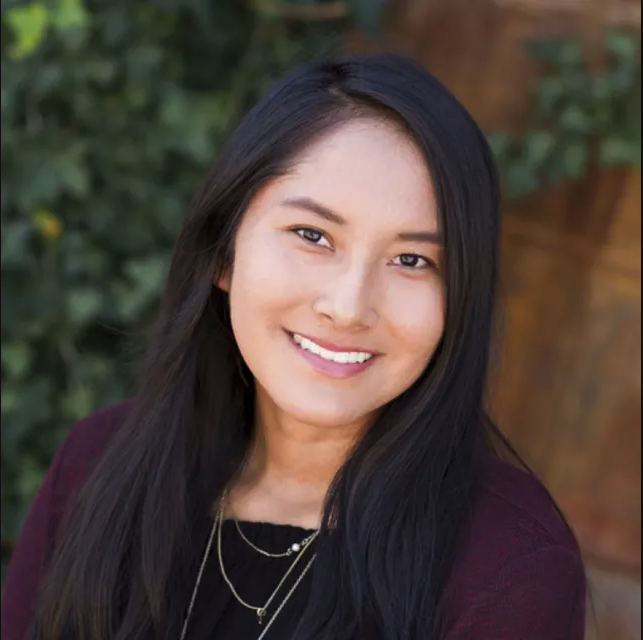 Kalle Benallie, Navajo, is a reporter-producer at ICT's Phoenix bureau. Follow her on Twitter: @kallebenallie or email her at kalle@ictnews.org. Benallie was once the opening act for a Cirque Du Soleil show in Las Vegas.