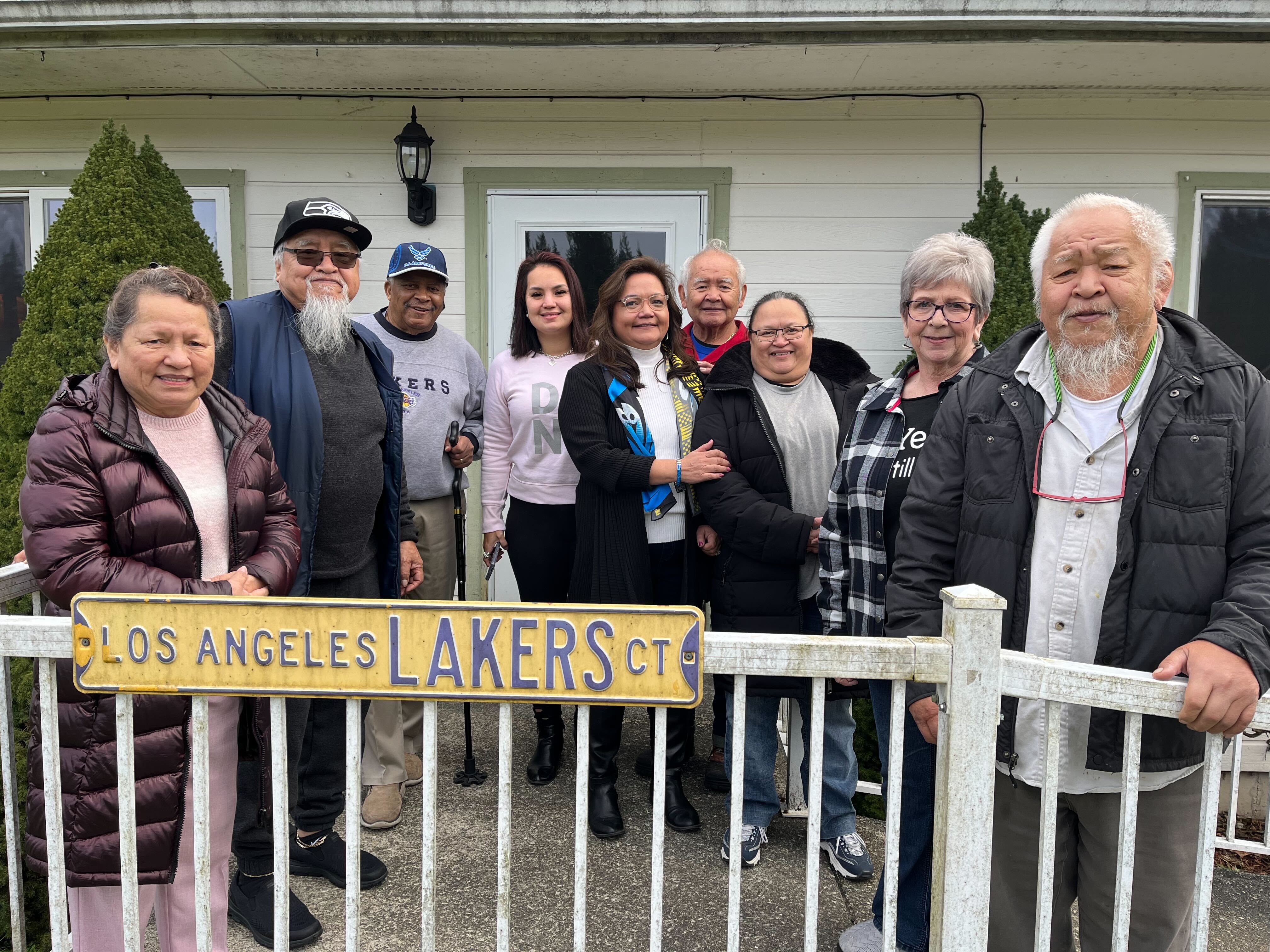 United Nations Calls for Halt to Nooksack Evictions in Washington

In what appears to be an unprecedented appeal, the United Nations has asked the U.S. to halt planned evictions of former Nooksack citizens from their homes on tribal trust lands in Washington, while the U.S. government simultaneously announced that it found no tribal housing policy or due process violations in at least a handful of the cases.

Two of the U.N.’s Human Rights Council special rapporteurs asked the U.S. on Feb. 3 to stop the impending evictions of more than 60 former Nooksack tribal citizens amid a federal investigation into allegations that the evictions would violate civil rights laws and other federal or tribal housing policies. Nooksack leaders have been trying to kick the former citizens — who were controversially disenrolled from the Washington tribe in 2018 — out of their federally subsidized homes for years because, they say, those homes are needed for tribal citizens.

In a press release announcing the U.N.’s request, the special rapporteur on adequate housing, Balakrishnan Rajagopal, joined the special rapporteur on the rights of Indigenous peoples, Francisco Cali Tzay, in calling for the U.S. to intervene and halt any evictions, raising concerns that the evictions may violate human rights contained in the Universal Declaration of Human Rights and United Nations Declaration on the Rights of Indigenous Peoples.

“We appeal to the U.S. Government to respect the right to adequate housing … and to ensure that it abides by its international obligations, including with respect to the rights of indigenous peoples,” Rajagopal and Cali Tzay said in a statement.

They said the evictions could have negative effects on the health of those being evicted because they would occur during the COVID-19 pandemic, and many are elders or children with disabilities or health problems.

“We are also concerned that the forced evictions will deny them the possibility of enjoying their own culture and of using their own language in community with others,” they said in the release.

Also on Feb. 3, the Bureau of Indian Affairs (BIA) said its investigation had turned up no tribal housing policy or due process violations with its plan to evict at least nine of the 21 families the tribe is trying to remove from the tribally owned homes.

But the agency didn’t address all of the allegations of wrongdoing, such as whether they rightfully owned their homes through completion of lease-to-own agreements. Instead, the BIA kicked that question to the Department of Housing and Urban Development, which subsidized the homes the former Nooksack tribal citizens are living in.

Still, Department of the Interior Assistant Secretary for Indian Affairs Bryan Newland implored the tribe not to move ahead with the planned evictions. Attorney Gabe Galanda, who is representing those facing eviction, shared Newland’s message with Underscore.news and Indian Country Today.

“While we respect and commit to uphold tribal sovereignty, we do not support the manner in which these actions are being carried out,” Newland said. “There is still time for the Nooksack Tribe to treat its community members with dignity and respect, and it is our hope that it will.”

Galanda first raised concerns about the potential lack of due process and violations of the Indian Civil Rights Act that led to the investigation. In a Feb. 3 letter, Galanda asked HUD and the Internal Revenue Service to investigate and audit the tribe to address the unanswered allegations and ensure it is complying with requirements of any federal housing program it participates in.

Nooksack Tribal Council Chairman Ross Cline didn’t immediately respond to a request for comment. The tribe has denied that it is violating any civil rights laws and said the federal government is improperly involving itself in the affairs of a sovereign government on behalf of “non-Indian individuals.”

The Department of the Interior and BIA likewise did not respond when asked about the U.N. request.

The long-simmering dispute heated up late last year after tribal leaders again tried to move ahead with the evictions. In all but one case, the former Nooksack tribal citizens — who call themselves the “Nooksack 306”  — say they are the rightful owners of the homes, having completed terms of lease-to-own agreements signed with the tribe, or having nearly completed the 15-year agreement.

Now, with the U.N.’s Human Rights Council stepping in, Galanda said he hopes the additional pressure keeps the former Nooksack tribal members in the homes. Some have lived in the homes for more than 20 years, he said.

Galanda said he believes it’s the first time the U.N. has taken such a position in a matter involving internal tribal affairs in the U.S. A search of a U.N. database didn’t reveal similar appeals.

“I’m just hopeful that that might help the United States do the right thing and keep my folks in house and home,” he said.

Mariya Stoyanova-Bahchevanova, a U.N. spokeswoman, said the organization filed its request with the U.S. Department of the State but that it so far has not received a response. The rapporteurs, she said, publicized the appeal because “they felt the wider public should be alerted to the potential for human rights violations.”

Any communication between the U.S. and U.N. about the matter will be kept secret for 60 days.

The Nooksack Tribe disenrolled the last of the more than 300 tribal citizens — about 15 percent of its population at the time — in a process the federal government called a “sham” in 2018. It had unsuccessfully sought to evict the members of the Nooksack 306 who lived in tribal housing for years.

The tribe again started the process of evicting the former tribal citizens late last year. In late September, Galanda raised his concerns about a lack of due process and those facing eviction not being able to have an attorney of their choosing to represent them in eviction proceedings, in addition to allegations that the tribe was attempting to seize homes they owned.

Galanda then filed an appeal with the U.N. on Dec. 15, asking it to intervene, just before the first eviction was scheduled to take place.

In his letter to the council, Galanda blamed HUD for not being aggressive enough in preventing the tribe from proceeding with its eviction plans and said it should have stepped in earlier to stop any evictions.

Meanwhile, on Jan. 13, tribal leaders told BIA officials that they would hold off on moving ahead with any evictions until at least Feb. 1, when they hoped the federal government could have its investigation completed.

“I am hopeful that this investigation will be the last, as this issue has been depriving deserving enrolled Nooksack tribal members of housing for more than six years,” Cline said in an email to BIA Northwest Regional Director Bryan Mercier. Galanda obtained a copy of the email through a public records request and shared it with Underscore.news and Indian Country Today.

Tribal leaders have resisted repeated calls from the federal government to pause the evictions while it investigates. They say the enrollment controversy was settled long ago and that tribal leaders are following a recently changed tribal housing policy that prohibits non-members from living in tribal housing.

Amid criticism that the federal government was violating tribal sovereignty by interfering in the internal affairs of a tribal nation, a BIA spokesperson said in a statement to Underscore.news and Indian Country Today last month that the agency had a duty to ensure tribes aren’t violating civil rights when federal programs or money are involved.

“BIA respects tribal sovereignty and supports tribal self-determination,” the spokesperson said. “Accordingly, we seek to work closely with our tribal partners to safeguard the rights of both tribes and individuals.”

With the tribe’s self-imposed delayed deadline now passed and some of the allegations cleared up, Galanda said those facing eviction are again dealing with the stress of knowing they could be forced from their homes at any point.

Still, the U.N.’s involvement, he said, is a positive sign for those who continue to say they were improperly disenrolled from the Nooksack Tribe.

He said it seemed that the BIA and U.N. experts had come to different conclusions, despite working with the same set of documents and information. And with so many federal agencies now involved, Galanda pressed the White House to step in and “decide whether to halt these domestic Indigenous human rights violations.”

Lead photo: Former Nooksack citizens, shown here, are facing possible eviction from their homes in a tribal dispute that is now drawing the attention of the United Nations. The U.N. sent a letter on Feb. 3 asking the U.S. to intervene and halt the evictions. Photo courtesy of Galanda Broadman