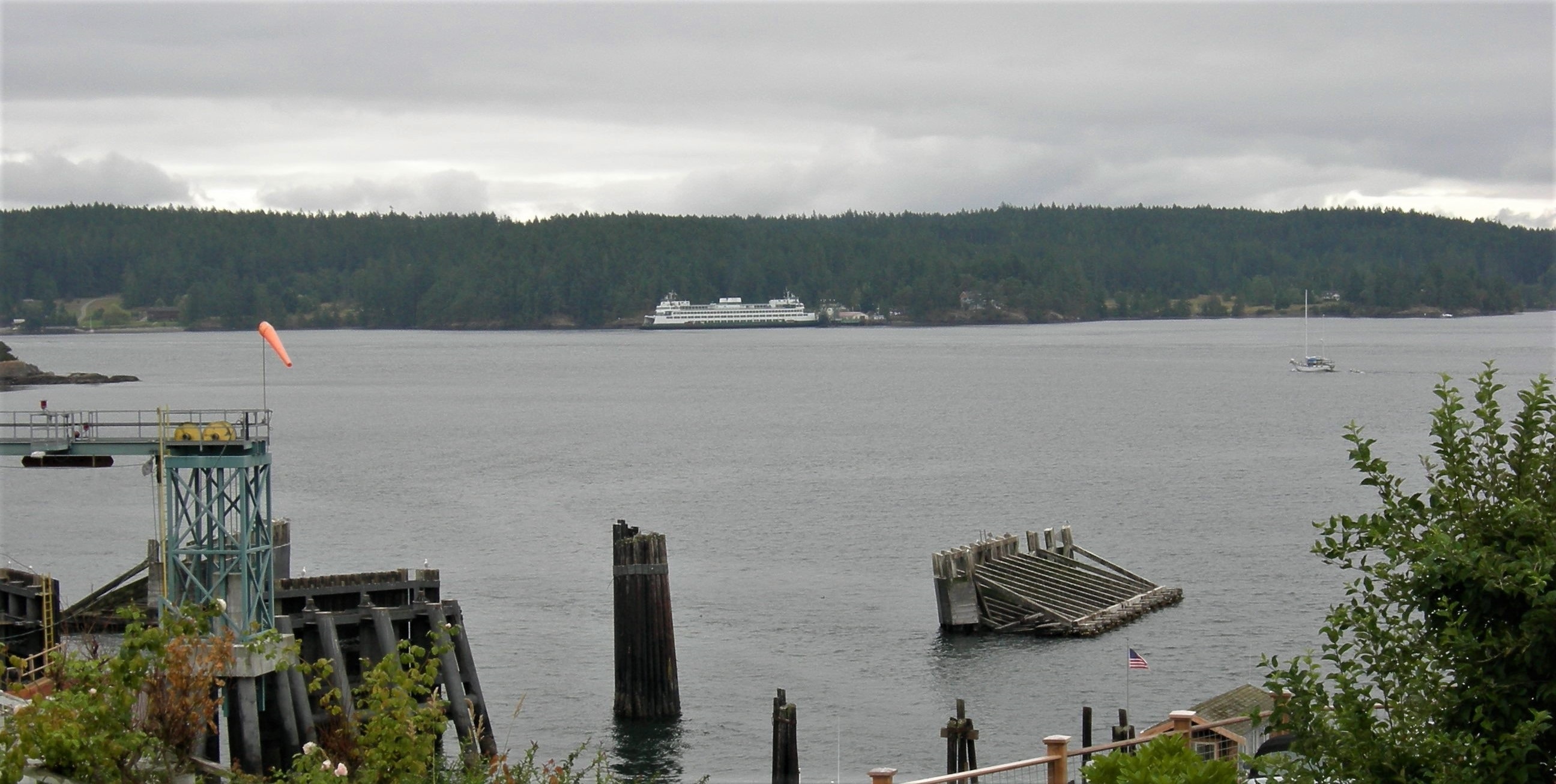 A blessing and celebration took place Oct. 2 along the Pacific Northwest waterway.

It took the U.S. Board on Geographic Names just nine days to approve the renaming of Harney Channel to Cayou Channel — blistering speed for a federal agency accustomed to taking testimony, reviewing documents, and deliberating.

“That’s unheard of,” said Ken Carrasco, lead proponent of changing the name of the waterway in the San Juan Islands of northwest Washington state, near the United States/Canada border.

“There was absolutely no negative feedback during the process,” Carrasco said. “The atmosphere, the feeling among the local population seemed to be that this was overdue, that it was something that really needed to happen.”

And so it did. On Oct. 2, a celebration took place on water and land to mark the renaming of the channel in honor of Henry Cayou (1869-1959), a Coast Salish man who is still the only Indigenous person to serve on the county’s Board of County Commissioners. He was also a successful fisherman, a founder of the islands’ electrical utility, and a local postmaster and school board member.

The channel formerly carried the name of a 19th century U.S. Army general known for abusive and often deadly actions toward Black and Indigenous peoples.

A blessing on the water took place, where and officials welcomed canoes, kayaks, sail and power boats and other watercraft to join the blessing in the channel. A community potluck happened that afternoon at West Sound Community Hall in the Orcas Island community of West Sound.

The name change was approved on July 5 by the Washington State Board on Geographic Names and on July 14 by the federal agency. It’s the second correction of an offensive or inappropriate name change in the San Juan Islands since 2017, when a bay that carried the name of an offensive slur often aimed at Indigenous women was renamed to Reef Net Bay, in recognition of an Indigenous fishing method that originated in the San Juan Islands.

Cayou Channel is two miles long and a half-mile wide and lies between Orcas Island and Shaw Island, which are part of an archipelago in San Juan County, Washington.

The archipelago is located in the middle of the Salish Sea — to the west is Vancouver Island, Canada; to the north, lower mainland British Columbia, to the east, western Washington state; and to the south, the Olympic Peninsula and Puget Sound.

Cayou Channel is two miles long and a half-mile wide and lies between Orcas Island and Shaw Island, which are part of an archipelago in San Juan County, Washington.

The archipelago is located in the middle of the Salish Sea — to the west is Vancouver Island, Canada; to the north, lower mainland British Columbia, to the east, western Washington state; and to the south, the Olympic Peninsula and Puget Sound.

The archipelago was historically the homeland of several Coast Salish peoples, among them the Lummi, Saanich and Samish.

Cayou’s father was an American of French ancestry and his mother was Lummi and Saanich. Several of Cayou’s descendants have served or are serving in leadership at the Samish Indian Nation and the Swinomish Indian Tribal Community.

Carrasco was shocked by what he learned in books and in 19th century newspaper reports: Harney whipped to death a Black woman in Missouri and fled prosecution; led the killing of Sicangu Lakota men, women and children in Nebraska; and took the U.S. to the brink of armed conflict with Great Britain over a jurisdictional dispute in the San Juan Islands.

Carrasco’s effort garnered an interesting ally: Paul Stover Soderman, a Harney descendant who actively supported the successful effort in 2016 to change the name of Harney Peak in South Dakota to Black Elk Peak.

Soderman dismisses the “cancel culture” label used by those who oppose the reconsideration of controversial geographical names and monuments.

Soderman noted that Harney, his ancestral uncle, had negligible ties to the San Juan Islands.

“He was there during the U.S./British territory dispute in the mid-1800s, causing trouble for a couple of years,” Soderman said. “But Henry Cayou – this was his home.”

A bridge between cultures

Cayou came into the world during a time of significant change in the San Juan Islands. Fourteen years before he was born, Indigenous leaders signed a treaty with the United States in which they ceded lands in much of Western Washington, making them available for non-Native settlers. The U.S. considered the islands part of the lands ceded by treaty. Great Britain, however, considered the islands part of British Columbia.

When Cayou was born, U.S. Army troops and Royal British Marines were jointly occupying the islands while both nations worked to peacefully resolve their claims to the archipelago – a peacekeeping presence necessitated in part by Harney’s aggressive rhetoric.

The occupation ended in 1872 when a German arbitration panel settled the territory dispute in favor of the United States.

Growing up, Cayou learned to fish the way his ancestors did, played baseball for a team composed of Coast Salish islanders, married a woman from a family of hereditary Tlingit leaders, and served as the islands’ point of contact for Chemawa Indian School.

Cayou used his Indigenous knowledge and business acumen to prosper in the new economy, taking each stroke of fortune and further investing it. He became a successful fish trapper and seiner. In 1895, he invested in his brothers-in-law’s shipyard and over time built a fleet of fishing boats and tugs.

One of Cayou’s most significant legacies is one felt today each time an islander turns the lights on — the co-founding in 1937 of Orcas Power Co., the islands’ electrical utility now known as Orcas Power and Light Cooperative.

While he walked in two worlds — elected to county office before enrolled Indians had the right to vote — he never gave up his Indigenous identity. He was listed as “Indian” on the 1910 U.S. Census and in 1919 was included in a federal census of unenrolled Indians in Washington state.

In the 1919 census, Cayou was listed as a member of the “Mitchell Bay Tribe,” a descriptor used by Office of Indian Affairs agent Charles Roblin for those who had chosen to stay on the islands rather than move to reservations post-treaty. Most if not all of those listed in the 1919 census, including Cayou, had ancestral or familial ties to the historical Indigenous community at Mitchell Bay on San Juan Island.

Today, between 1.2 and 3.8 percent of the island population identifies as Indigenous, with 2.6 percent of those identify as being of two or more races, according to the U.S. Census, and several tribal nations exercise treaty rights there.

Stephanie Buffum, one of the proponents of the name change, said she believes the change went smoothly because it was something that should have happened long ago.

“I have such a great feeling about it,” she said. “The federal government took swift action and didn’t sit by the wayside on this. … This name change was inevitable, like a flooding tide. It just needed a rock moved.”

Gretchen Krampf, a supporter of the change and a coordinator of the Oct. 2 celebration, said the name change reflects an increasing awareness that so much local history has been dismissed in favor of that which occurred after the arrival of colonizers.

“This is not about cancel culture. It’s about establishing a right relationship,” Krampf said. “Names and words matter. The name ‘Harney Channel’ didn’t fit anymore. It’s not about ‘canceling’ more than it is about realigning.”

"All the place names that are being changed or challenged had Indigenous names for thousands of years before being canceled themselves,” he said. “The 'newcomers' have placed and held their names here for 500-plus years, and today the original inhabitants are reclaiming these place names and we, as allies, are helping them."

Lead photo: Cayou Channel, formerly known as Harney Channel, is shown here from Orcas Island, is on the route of the Washington State Ferries, the largest ferry system in the United States. A celebration of the renaming of the channel for a local Coast Salish leader is set for Oct. 2, 2022. (Photo courtesy of Joe Mabel, Creative Commons)