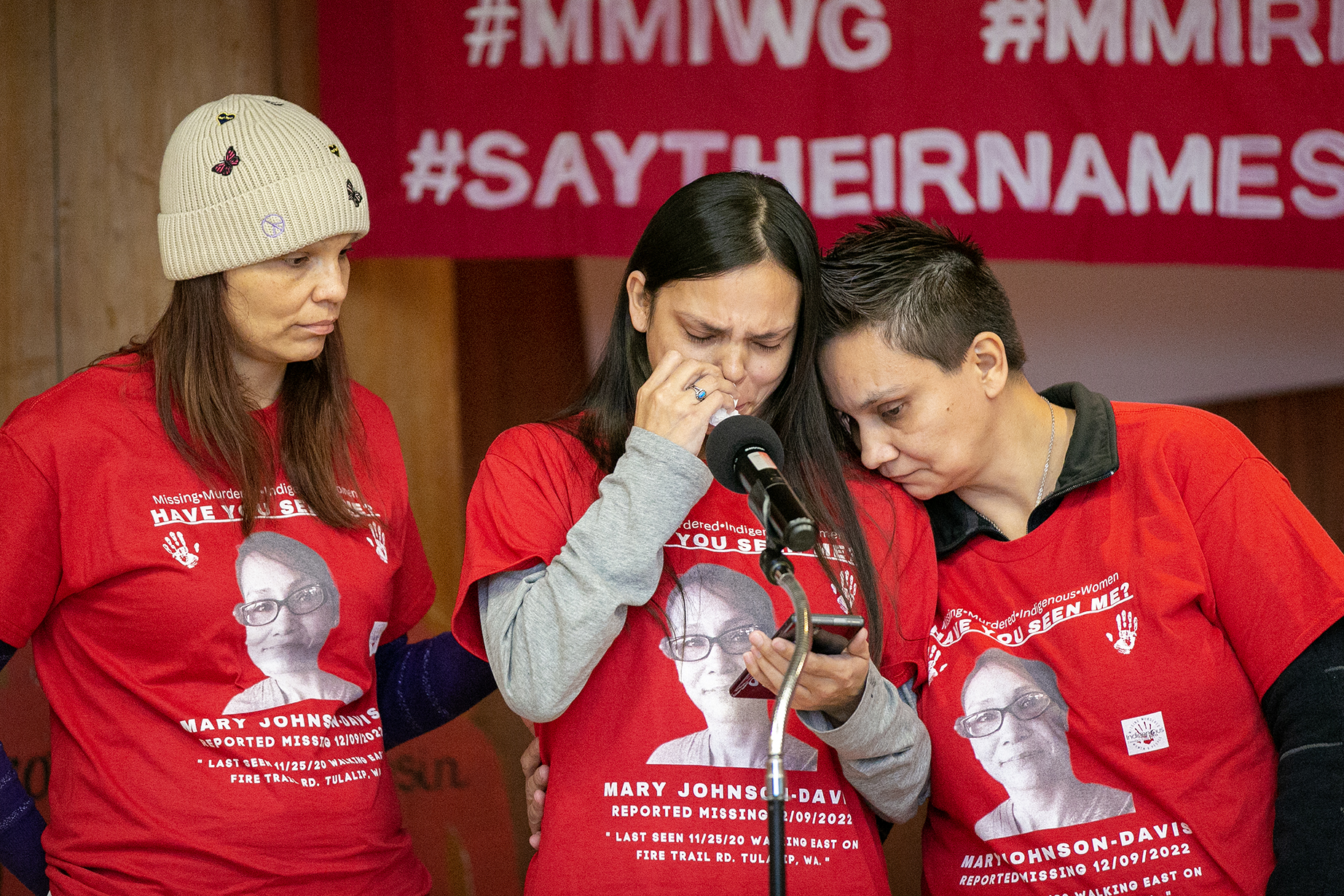 Missing Woman's Family: 'If She Had White Privilege, We Would Have Answers'

Family and advocates have continued to shine a light on the case of Mary Johnson-Davis, who vanished from the Tulalip Reservation on Nov. 25, 2020.

As of Sunday, Mary Johnson-Davis had been missing for 746 days.

The Tulalip woman’s face stared out from all corners of the room on posters, banners and red T-shirts, at an event titled “What Happened to Mary Johnson-Davis? Two Years is Too Long” on Sunday.

Missing and Murdered Indigenous Women, People & Families hosted more than 50 attendees at the Daybreak Star Indian Cultural Center in Seattle. Family and advocates have continued to shine a light on the case, even as it has faded from headlines.

“If she had white privilege, we would have answers. This would have been solved,” said Gerry Davis, the youngest of the four Davis sisters.

Gabriel Galanda, an Indigenous rights attorney, made a clear and impassioned call to action.

“To the United States government, to the Department of Justice, to the Federal Bureau of Investigation: Do everything in your power across state lines on an inter-jurisdictional basis between local, state, tribal and federal government to, first and foremost, start providing answers to the family,” Galanda said. “Even if it is the sad truth that they’ve been waiting to hear for two years, they deserve to know what happened to their sister.”

Johnson-Davis went missing from the Tulalip Reservation on Nov. 25, 2020. She had texted a friend at 1:52 p.m., saying she was “almost to the church” while walking along Fire Trail Road. She never reached her destination. Later, her cell phone connected to towers around north Snohomish County.

French-American documentarian Sabrina Van Tassel flew out from Paris to work on a documentary on Johnson-Davis’ story. Van Tassel, who also directed Hulu’s “The State of Texas vs. Melissa,” attended Sunday’s event with a film crew.

“There are red flags all over this case,” Van Tassel said. “I’ve been on this for 10 years, and I can tell you predators in prison know that they know they can go on the reservation and take advantage of girls, of women. Nobody cares.”

Van Tassel is aiming to release the documentary — with the working title, “Missing From Fire Trail Road” — in six months.

The Davis sisters have three main theories as to what happened to their eldest sister.

She could have been trafficked. The sisters said a confusing web of police jurisdictions allows criminals to target Indigenous women and get away with it.

There could have been an accident. Johnson-Davis might have been hit by a car on a blind corner and fallen into a hidden marshy area. The sisters desperately want a thorough cadaver search of Fire Trail Road.

But in the opinion of all three sisters, the most likely answer is that Johnson-Davis’ estranged husband Eric Johnson kidnapped or murdered her.

“In my heart and soul, I feel that it’s the person very close to her — as you feel,” said Tulalip Chairwoman Teri Gobin, referring to the estranged husband and gesturing to Johnson-Davis’ sisters.

“If he actually loved her, he’d be here,” Gerry Davis said Sunday.

It took the husband two weeks to report Johnson-Davis missing, per an FBI report.

According to the Davis sisters, the husband has not been interviewed by police about his wife’s disappearance. They said he hired a lawyer, changed his number and moved to California.

When the sisters were young, the state took them from their birth parents due to substance abuse issues. The girls were separated and put into the foster care where they were abused, Johnson-Davis’ sister Nona Blouin said.

Johnson-Davis and Blouin later sued the foster care system and received $300,000 settlements, the sister said. At Sunday’s event, Blouin said the husband only ever wanted her sister’s settlement money and that he funneled away $50,000 into a separate, private account.

“We went through hell when the state abandoned us in the foster care system. Don’t abandon us again,” Blouin said. “We want her phone records. We want searches done.”

Galanda condemned the lack of progress in the case.

Roxanne White, who organized the event, encouraged tribal and family members to speak out.

“Are there any legislators here?” White asked the room. “No. Is KING 5 here? Is KIRO? KOMO? We’re here in Seattle. I’m really disappointed.”

Indigenous women and people go missing more than four times more often than white women, according to research conducted by the Urban Indian Health Institute in Seattle. Washington state has the second-highest number of missing Indigenous people in the United States.

Like many missing and murdered Indigenous women’s cases, the jurisdiction of Johnson-Davis’ case is murky. She went missing from the Tulalip Reservation, which is within the Tulalip Tribal Police Department’s territory. If she was abducted or killed off the reservation, then the investigation could belong to Marysville police. And if the perpetrator left the state, the jurisdiction becomes even more complicated.

The FBI is offering a $10,000 reward for information, and the Tulalip Tribes are offering an additional $40,000.

“She may not mean much to society: She’s just a Native. But she means the world to us,” Gerry Davis said. “Every life should have the same value, but somehow in America it doesn’t.”

Lead image: Gerry Davis, supported by sisters Sara, left, and Nona Blouin, reads a statement asking for help in the search for their missing sister, Mary Ellen Johnson-Davis, during a gathering marking two years since her disappearance in Snohomish County on Sunday, Dec. 11, 2022, at Daybreak Star Indian Cultural Center in Seattle, Washington. Ryan Berry / The Herald

Kayla J. Dunn is a reporter at the Everett Herald. She can be reached at 425-339-3449 or kayla.dunn@heraldnet.com. Find her on twitter: @KaylaJ_Dunn