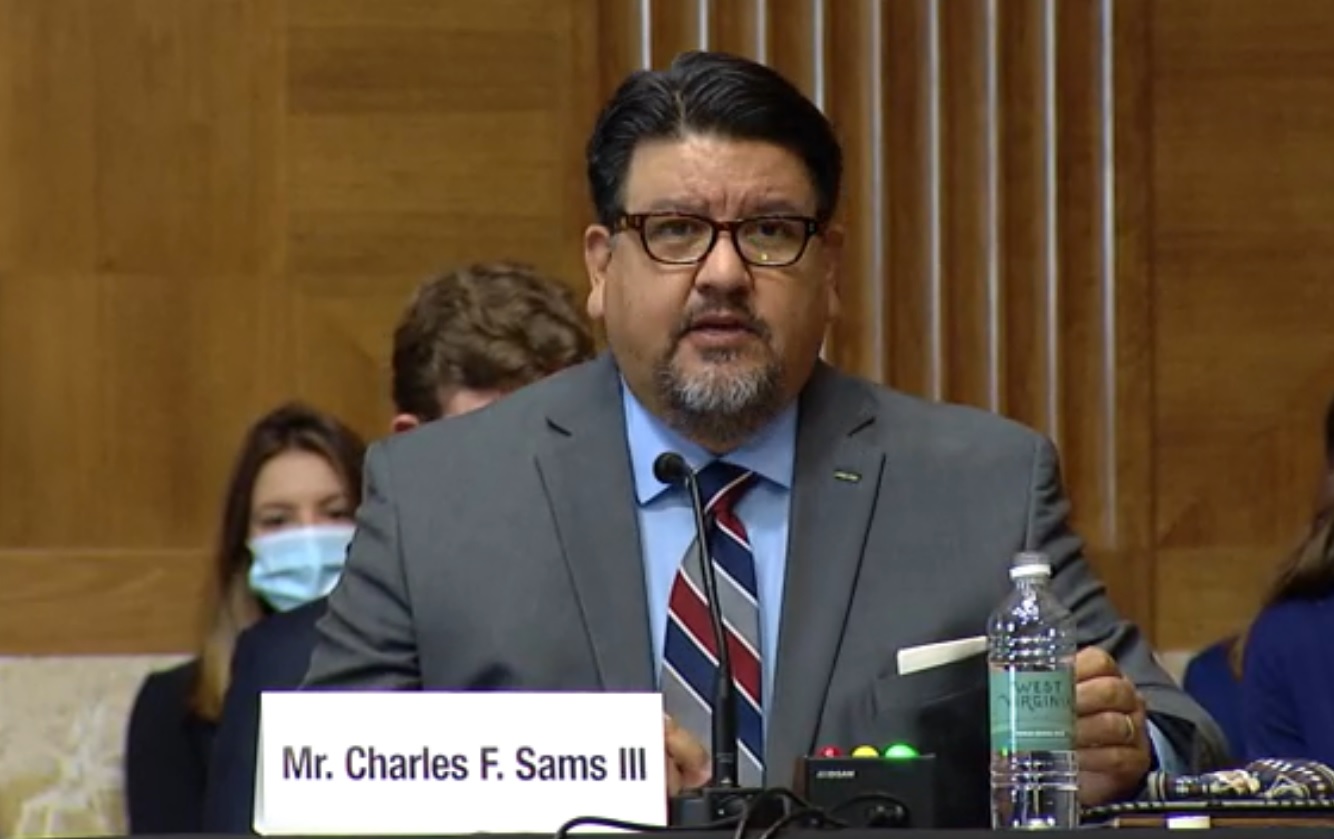 The Senate Committee on Energy and Natural Resources took the next step in the confirmation process during the Oct. 19 hearing, where senators asked about Sams’ priorities if confirmed as well as how his 25-year background in tribal administration and nonprofit natural resource and conservation management would apply to the job. He currently serves on the Northwest Power and Conservation Council and is a U.S. Navy veteran.

Sams is Cayuse and Walla Walla, of the Confederated Tribes of the Umatilla Indian Reservation in Oregon, where he lives with his wife and family.

“I have known Chuck Sams for years. During our work together, I have seen firsthand his commitment and dedication to people in the outdoors. He has been a real leader and a role model in the stewardship of American land, water, wildlife and history,” Sen. Ron Wyden, a Democrat from Oregon, said in introducing Sams. “I can't think of anybody in America better and more qualified to do this than Chuck Sams, with his unique perspective as the first Native American to lead the park service. Colleagues, this is frankly long overdue.”

If confirmed, Sams would lead a department that oversees more than 85 million acres of national parks, monuments, battlefields and recreation areas, among others. He’d also take over an understaffed service struggling to keep up with surging popularity among visitors, lagging morale, concerns over gender discrimination and harassment of employees and a backlog of maintenance needs. Addressing those challenges would be among Sams’ top priorities, he told the committee.

Given the long list of challenges, many of the questions from senators dealt with how the park service would manage maintenance money included in the Great American Outdoors Act for park service infrastructure and how Sams would increase staffing levels and improve morale as the country’s national parks experience record-breaking crowds. One committee member, Sen. John Barrasso, a Republican from Wyoming, said he was concerned Sams didn’t have any direct experience working with or in national parks, saying he was “reserving judgment” on Sams’ nomination.

Sen. Angus King, an Independent from Maine, echoed that concern, asking Sams to “convince me that you're ready to take on this challenge, having had no experience as a park ranger, a park manager, or otherwise involved in the National Park Service.”

While he hasn’t worked for the park service, Sams said much of his career has involved similar work or work within or with the service or public lands. As a Umatilla tribal administrator, Sams noted, he managed “one of our original reserves, which is a reservation, the Umatilla Indian Reservation, which is an over 190,00-acre reservation” while co-managing millions more acres with the federal government and state and local authorities. Sams added that his nonprofit work has included facilitating land transfers and donations to the park service, in addition working in park system lands with volunteers on conservation and invasive species management, among other related roles in public lands and conservation.

Sams also said he’d be sure to thoroughly consult with tribes, as well as other stakeholders like state and local governments, before making decisions.

“In Indian Country, we expect an open discussion of the federal government prior to making decisions, not after the fact,” he said in his opening statement. “If confirmed, I will bring this spirit of consultation to the service as director.”

In response to a question from Hawaii Sen. Mazie Hirono, a Democrat, Sams said he’d also work to ensure that Indigenous history of park service lands — which often were taken from tribal nations — is included, in addition to incorporating Indigenous views and knowledge in decision making.

“I look forward to working with Native communities across the United States, whether that's in your home state of Hawaii, or Alaska Natives and throughout the U.S. territories, to make sure that this story can be told as broadly as possible,” he said. “And I think it's important to be able to work with Native folks on traditional ecological knowledge and helping manage those spaces so that we're conserving them based on 10,000 plus years of management of those spaces to ensure that they'll be here for future generations to enjoy.”

The committee didn’t vote on Sams’ nomination on Oct. 19. A date for a vote has yet to be determined. If his nomination is endorsed by the committee, he must then get a majority of votes from the full U.S. Senate to be officially confirmed.

Lead photo: Screenshot from an Oct. 19 hearing in the U.S. Senate, where senators formally considered the nomination of Chuck Sams for National Park Service director.