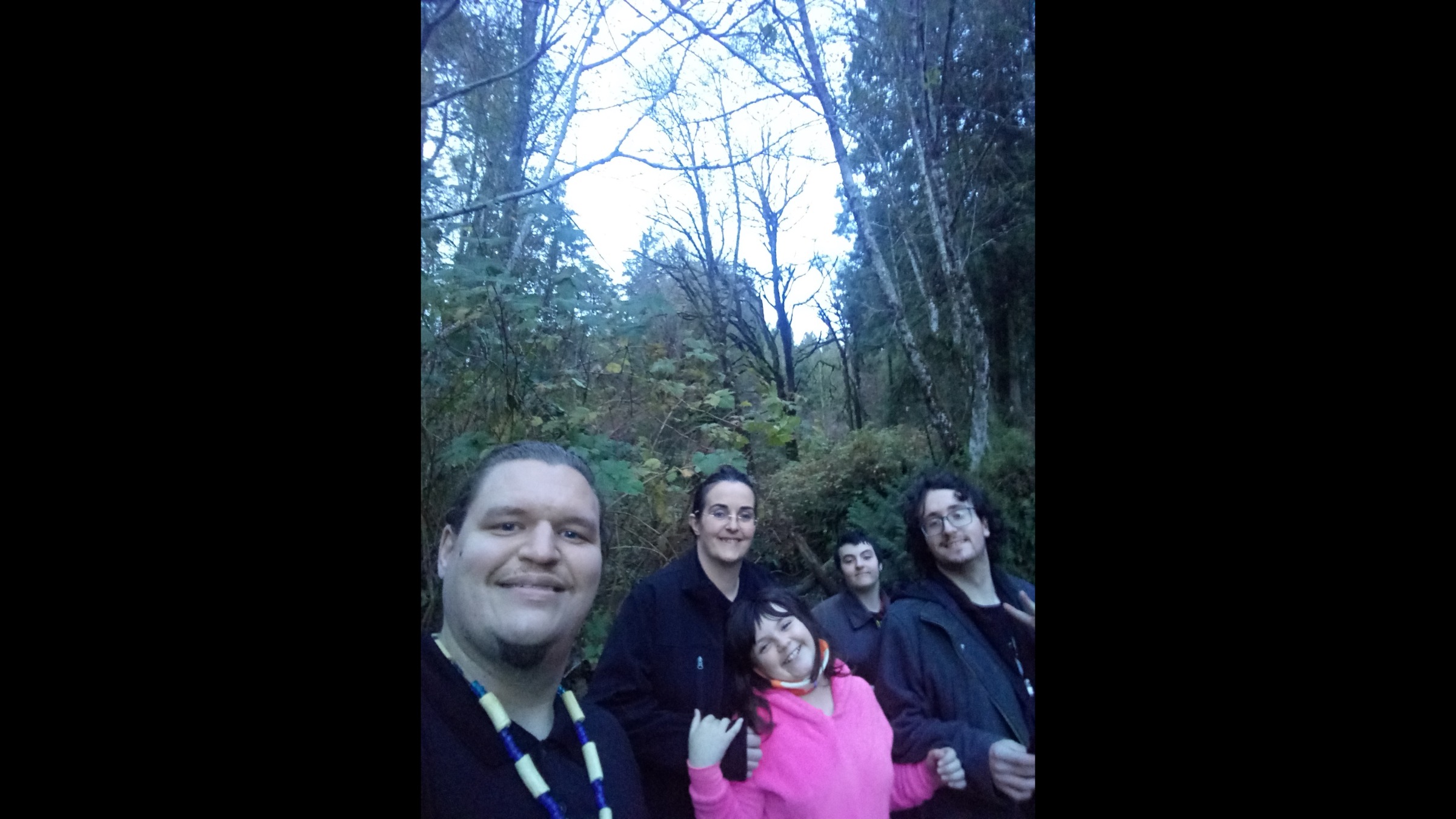 Greg Urquhart of Washington is a student, activist and healer.

In 2016, Greg Urquhart was a graduate student studying psychology at Washington State University. Being Eastern Band Cherokee, he felt compelled to take his daughter with him to the Dakota Access Pipeline to drop off supplies to protesters and water protectors. When clouds of tear gas went into the air, he jumped into action, using his military training to treat the injured.

“I had the skills from the Combat Lifesaver Course to flush people’s eyes and help people out on the bridge. I had no intention of being an activist. At the end of the night, I came home, but I couldn’t stay. I had to go back,” he said.

The experience inspired Urquhart to create South Sound Street Medics, a group that provides basic medical services at protests or demonstrations, as well as Red Road Rising — an Indigenous-led spiritual group in Olympia.

“I’m a father of three, married for almost 20 years. My family’s my life and I’m an avid activist in many different ways: through promoting social justice advocacy, through research and inclusion of Native Americans and on my journey of psychology,” he said.

Urquhart grew up with a deep love of the outdoors — walking around the waterfront at Ruston Way in Tacoma, fishing on Owen Beach, hiking, hunting, bird watching and foraging for edible and medicinal plants.

He attended Woodrow Wilson High School and lettered in bowling at Stadium High School. Shortly after graduation, he joined the National Guard at 18. He’d hoped to help his community, expecting to fight fires or provide local aid with the promise of G.I. Bill benefits to help pay for college at the end of his service.

By the time he was 21, Urquhart was married, a father or two and being deployed for two tours in Iraq as an M1 armor crew member and a cavalry scout.

When he returned to the U.S., he attended Tacoma Community College and created a veteran student group, but providing for his family came first.

“I worked a lot of overtime and took one to three classes a quarter. I chipped away at that degree forever and changed my major a few times. It took eight years to get a two-year degree,” Urquhart said.

He finished his bachelor’s degree in psychology from the University of Washington, Tacoma, in 2010 and continued on to his master’s at Washington State University.

Though successful in college, he didn’t return from his military service unaffected. Urquhart sought help for his post-traumatic stress disorder with Veterans Affairs.

“It just was a really cold experience, they seemed like they didn’t really care. They had no understanding of how I view the world and a lot of vets that go there don’t feel heard or feel appreciated,” Urquhart said.

This experience is especially common for Native veterans seeking help from Western therapies, he said.

In 2014, he conducted the largest pan-Tribal veteran study in the nation. Using social media and the Internet, he tracked down members of countless veterans groups and Tribes seeking Native veterans to survey. He included more than 200 Tribes with participants from every branch of the military.

“We found a lack of cultural awareness and sensitivity in a pan-Tribal sample representative of all Native Americans across the U.S. That was my passion and what moved me into psychology,” he said. “It’s stuff our communities already knew. A lot of times our vets go to the VA and they’re not understood because it’s a Eurocentric culture.”

Now, as a Ph.D. student at Washington State, he is completing his final requirement of a one-year internship at UW Tacoma’s Psychological and Wellness Services, a placement he describes as a “full-circle moment.”

“It’s the best job I’ve ever had — individual counseling with clients and co-facilitating groups. It’s really rewarding to impact students’ lives, help them out,” he said.

After graduation, he hopes to find employment at a university counseling center to help all students with a special expertise in helping veteran and Native students.

Combining his love for the earth and his community with his military experience, Urquhart founded South Sound Street Medics. Now with nearly 100 members, the group will celebrate two years since its founding in June 2020.

The group recently went out to support elders and activists who, for more than 500 days, held demonstrations to protect an old-growth forest at Fairy Creek in the southern Vancouver Island region of British Columbia.

“I hope they learn the value and importance of honoring our traditional and ancestral ways, Mother Earth and honor our promise to the Creators. And if we don’t, this world will look drastically different,” he said about the protest.

The street medic group’s goal, on top of protecting their community, is to train more street medics to aid the injured at demonstrations.

He said his professors have always been supportive of his activism.

“Whatever I could manage without failing my classes, everyone understood,” he said.

On the weekends, Urquhart finds healing with his Red Road Rising group. They gather as the sun rises over the waters in Olympia.

“When I came back from Iraq, I realized I always knew some part was missing. I was thrown into an existential crisis and I looked into where I come from,” he said.

As he explored his Cherokee roots, he walked into the Native center on campus.

“I peeked my head in and ran out and a woman ran after me. She reassured me it was a safe place. I didn’t know if people would accept me, if it was a safe place to explore my roots and traditions. I’m more of an urban Native, but I’ve come to have a lot of elders that are Coast Salish and First Nations,” he said.

“Olympia has provided community and support to those who reconnect with Indigenous roots. A lot of us didn’t grow up that way. That knowledge has been lost to us, but there’s a desire to reconnect. So we provide space to reconnect and are open to everyone who comes in a respectful, good way,” he said.

Now, the outdoors is where he finds peace and continues his mission to heal himself and others through Indigenous knowledge, psychological wellness and fighting for social change.